Will the Knicks Find Stability in the Backcourt This Season? 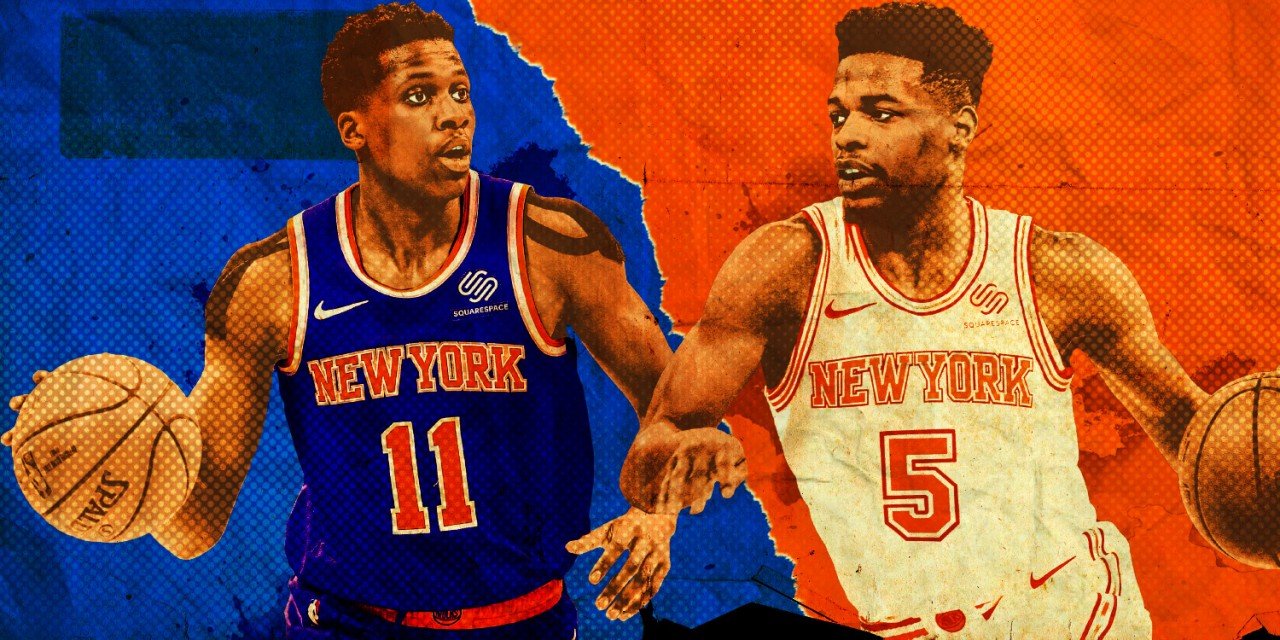 The Knicks have a crowded backcourt with NBA players seeking sizable minutes this upcoming season. David Fizdale has his hands full.

Though you might not know it if you’ve only followed New York’s offseason on Twitter, the Knicks’ biggest logjam entering the year isn’t the power forward spot, but rather the backcourt.

Dennis Smith Jr., Elfrid Payton, Frank Ntilikina, Allonzo Trier, Damyean Dotson, and Wayne Ellington are all guaranteed contracts, most of whom (time to prove it, Frank!) have staked their claim to minutes in an NBA rotation.

R.J. Barrett should probably get some minutes at the 2, if just to see how he looks there. Kadeem Allen is 27 and on a two-way deal but has ingratiated himself with David Fizdale last season, and has proven himself as, at the very least, a serviceable second-to-third string point guard. Reggie Bullock, when healthy, will likely be used as a small forward—but he’s played plenty of shooting guard in his career. It’s unlikely any of the training camp invites other than maybe Kenny Wooten make the big boy roster, but three of them (Amir Hinton, V.J. King, and Lamar Peters) are guards.

Even if the worst happens and Ntilikina isn’t able to carry his FIBA confidence and momentum over to the regular season, that still leaves a lot of juggling for Fizdale. Guys who last year were given free rein to experiment and make mistakes will see their minutes and roles decrease in a more experienced, capable offense—think of how Trier got to flex his point guard muscles and Dotson was given some off-the-dribble responsibilities.

Not only does the team have a lot of guards, they also have a lot of guys who either want or need the ball in their hands to be effective. Seven Knicks had a usage rate higher than 20% for their respective teams last season: Smith (27.3% for the year, a whopping 32% for the Knicks), Julius Randle (27.8%), Bobby Portis (24.6%), Trier (21.5%), Marcus Morris (20.9%), Kevin Knox (22.3%) and of course Barrett, who somehow managed to post a 32% usage rate while playing alongside the best prospect since LeBron. For those keeping track at home, Smith and Barrett’s usage of 32% would put them in line with Giannis’ rate as MVP of the NBA if maintained over a season. Shockingly, Payton, a guy who seems to need the ball to have any chance at being productive, had the fourth-lowest usage rates of anybody currently on the roster: 18%, only ahead of Ntilikina, Dotson, and Taj Gibson.

Divvying Up Roles and Minutes

With so many mouths to feed, many of whom are wings and bigs, the makeup of the guard rotation becomes especially tricky. For instance, Trier was one of the three best guards on the team last season, but his iso-heavy game is redundant in a starting lineup with Smith, Randle, and possibly Morris. On the other hand, Trier also had the team’s third-highest percentage on catch-and-shoot threes (43.9%) proving that he can be useful as an off-ball option if he can just curtail some of his ball-stopping habits.

Can Fizdale get Trier to buy into such a role, or will he chafe at the limitations imposed on him?

The earthquake after Zo’s dunk pic.twitter.com/JG3RtzIc0j

Dotson and Bullock’s early-season injuries complicate the picture even further. As the two most established 3-and-D options on the roster, either would make sense between Smith and Barrett, spacing the floor to open driving lanes on offense while shoring up what will likely be a very rocky defense, at least to start. Ellington is an option for that spot, bringing veteran savvy to a young backcourt that desperately needs it—but while he provides the requisite spacing, the defense he brings could be borderline unwatchable.

Neither Frank defenders nor detractors want to hear it, but Ntilikina is both the best conceptual fit in this lineup and the least likely to be in the rotation by January. If it’s true that Ntilikina has taken the steps he so desperately needs to take as a confident shooter, decisive passer, and not laughably bad finisher, his low-maintenance brand of offense (as in, “please don’t pass me the ball”) and almost limitless defensive versatility are exactly what’s needed between Smith and Barrett. But the likelihood of that being the case is, well, let’s just say they call it a best-case scenario for a reason.

And then there’s the possibility that Fizdale decides to go with Morris at the 3 and R.J. at the 2. While that seems less than ideal given the overabundance of guards that will be slid even further down the depth chart, Morris spurning the Spurs for the Knicks indicates that he believes he’s in store for some real playing time, and he damn sure ain’t taking Randle’s spot.

That’s a lot of possibilities for Fizdale to try to wade through. The one thing that is almost guaranteed this season is that the lineups used will change considerably as the season goes on. Fizdale has a shown a propensity for throwing out things to see how they go (most of which went badly last year), and I don’t see his lineup-tinkering habit going anywhere soon. It would be shocking if the season opener has the same starting lineup as the season closer. There’s even a chance that with 25-year-old Damyean Dotson and 23-year-old Allonzo Trier approaching restricted free agency this summer, the team tries to flip one of them along with one of the vets to a team looking to make a playoff push at the deadline.

But for my money, the ideal guard pairings once healthy would be:

Dennis Smith and Damyean Dotson starting, Payton and Trier coming in off the bench, and Ntilikina and Ellington filling any holes that need filling, whether on the wing or in the backcourt, with Barrett sometimes taking over bench lineups as a big lead guard. This is, of course, barring the unlikely but still possible leap from Ntilikina that allows him to lock down a larger role in the team’s future.

»READ: Frank Ntilikina: will he stay or will he go?