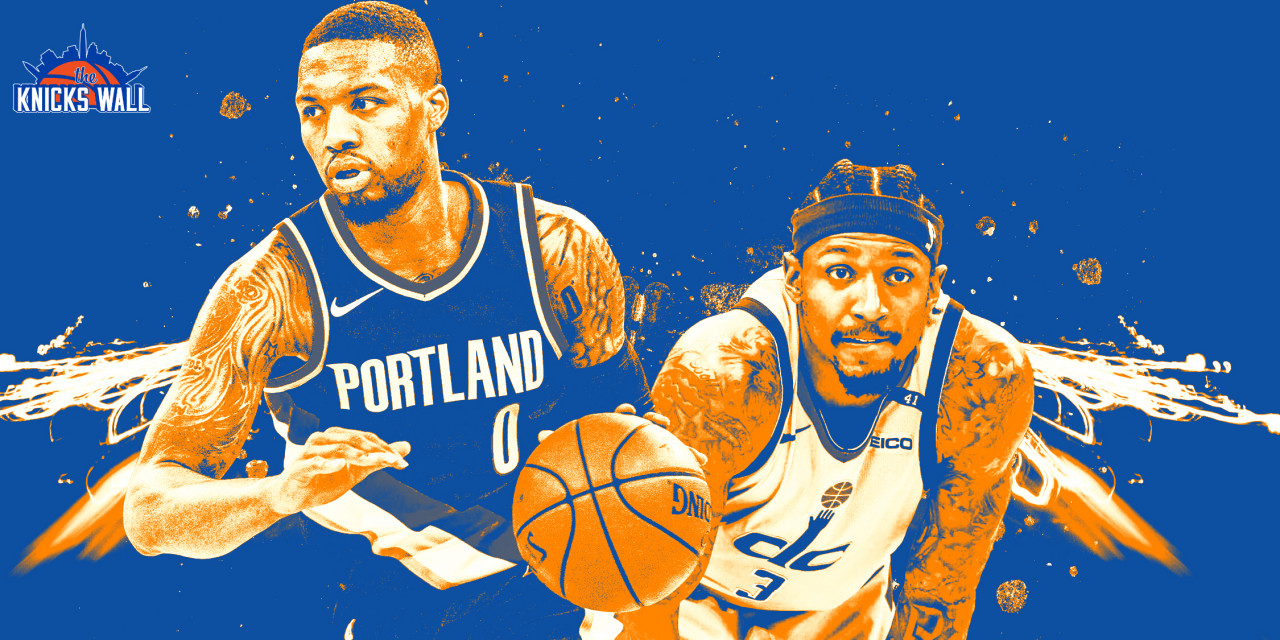 Now that the Knicks have assembled a playoff-caliber team, are they in position to bolster their talent by trading for a star?

As the New York Knicks continue to build on the surprising success from last season, there is one Big Apple–sized elephant in the room that needs to be addressed. Will they go after a star at the risk of breaking up their core or will they stand pat and continue to build gradually? The team has pretty much brought back the same squad that won 41 games in the shortened 2020–21 season. Led by Julius Randle and an ever-developing young core, they’ve added hometown kid Kemba Walker and a new resident Frenchman, Evan Fournier (don’t Google it).

Evan Fournier scored most points by a Knick in a debut in FRANCHISE HISTORY with 32 points, and even kicked in 4 steals with his engaging defense. @reidgoldsmith with the tape on @EvanFourmizz big night 🔥https://t.co/ZJktc3ZMTx pic.twitter.com/HknmAiacO0

With a stellar season exceeding everyone’s expectations and the emergence of Randle, the team is ahead of schedule. Naturally, the conversation turns into the possibility of the Knicks adding a disgruntled star or a player looking to get out of an undesirable situation. What are they willing to pay? Is that unmissable player even available? Is it worth breaking up such a cohesive unit?

With these questions in tow, there is a strong chance the Knicks come to a crossroads as this season progresses with a difficult decision to make. The front office and reigning coach of the year Tom Thibodeau have been successful in changing the culture and building a foundation, but team president Leon Rose has indicated that the team will be aggressive in looking for blockbuster trade opportunities.

The NBA landscape is a volatile and ever-changing one where players hold the power. Rose knows this being a former influential agent who represented starts around the league, like LeBron James, Allen Iverson, Carmelo Anthony, Joel Embiid, and Chris Paul. Another kingmaker the Knicks have up their sleeve is team advisor William Wesley, a.k.a. World Wide Wes, a man that many believe has the plus of the players. Rose and Wesley came to the Knicks after 10 years at the Creative Arts Agency and a 40-year personal relationship.

These factors are important because these men have had a hand in shaping the NBA. As the faces of a revamped front office, they have the credibility and track record that was severely lacking when it came to player acquisition. The Knicks have been on the short end of many deals.

With the movers and shakers in place, the time to make a splash could be sooner rather than later. If a deal is to be made the Knicks must be careful who they dangle in potential moves, they can’t do “addition by subtraction” like Phil Jackson. It’s clear that New York is open for business. It’s important to consider, before breaking up their core, that this team is still very young, and a big-time move right now isn’t necessarily going to put the team in contention with the Brooklyns or Milwaukees of the world.

Obi Toppin and Immanuel Quickley will easily become attractive pieces teams will ask about in negotiations as they continue to ingratiate themselves to the league in their sophomore campaigns. This year’s rookie class features sharpshooter Quinten Grimes, an all-around talent in Miles “Deuce” McBride, and lesser-known but freakishly athletic big-man Jericho Sims. The Knicks have also stashed away second-round pick Rokas Jokubaitis in Europe where he’ll play for Spain’s FC Barcelona. The plethora of young talent headlined by RJ Barrett, plus an abundance of future draft picks, has given the Knicks a bright future but also an embarrassment of riches to be used in potential trades.

With the continued additions of young talent, New York can fully commit to the youth movement while continuing to sprinkle in seasoned veterans on short-term deals to supplement lacking areas. Even as the franchise gears up to take another leap forward this season the truth is, right now, the Knicks aren’t considered a championship contender even with the possible addition of a certified star. Leon Rose and company must account for this when considering a move that shakes up the roster. Making a move too early can be a devastating setback. As of right now the pieces fit and more importantly, they’ve bought into Thibs’ message, so there is no rush.

The NBA trade block is currently as fluid as it’s ever been. Filled with the usual suspects and some possible new targets as extensions are failed to be negotiated. Are any of these players actually viable options? Let’s look at some star players recently associated with the Knicks. First, Wizards’ three-time All-Star Bradley Beal, rumored to be a target last season, has effectively removed himself from the conversation, as his hesitancy to be vaccinated rules out playing in New York City.

The Trail Blazers’ Damian Lillard is another player connected to the Knicks. According to talking heads like Chris Broussard and Stephan A. Smith, New York is apparently the preferred destination of Damian Lillard if he were to demand a trade. The high cost of bringing a player of Lillard’s caliber to a team for limited success might not be worth the gamble.

Though Lillard is an undeniable talent, he’s a little older than the rest of the team and trading for him would surely leave the Knicks devoid of many of their young up-and-comers with the high possibility Portland demands Barrett, a combination of other young players and draft capital. Moving on from Lillard would signal Portland’s long overdue rebuild. Trading for Dame also creates a log jam with Kemba Walker and Derrick Rose already sharing point guard duties, respectively. Considering the Knicks’ position and Lillard’s age, he would benefit more from a contender where he can give himself a few cracks at a ring.

Then there’s Karl-Anthony Towns, a player who has always been in rumors involving the Knicks but not without merit. Towns is a local kid who grew up a Knicks fan whose father has publicly voiced his son coming to the Knicks. This time the rumors may hold some validity as news has come out of Minnesota that the Timberwolves are a dysfunctional franchise following the firing of team president, Gersson Rosas, after allowing him to make a number of moves, reminiscent of the Knicks firing Phil Jackson a week after the 2017 NBA Draft. Thibs has stated he’s open to a reunion after previously coaching him in Minnesota.

Towns seems to be the most fitting player if the Knicks were to make a trade. The Kentucky connections run deep within the Knicks, including assistant coach Johnnie Bryant and fellow alums Randle, Quickley, Nerlens Noel, and Kevin Knox. The CAA connection is also there, as Rose was KAT’s agent before he took over as Knicks president. Towns also fits the Knicks timeline age-wise. He’s only 25, can continue to grow with the Knicks core, and wouldn’t cost as much as Lillard. Minnesota may also be considering a full restart with 2020 first overall pick Anthony Edwards, the fact that a 20% stake in the franchise was recently sold, and they need a new team president. Any trade that doesn’t include Barrett and/or Randle for Towns should at the very least be heard.

The Knicks have bounced back nicely from the catastrophic Phil Jackson era, but some fans might still have PTSD. The team is in a better place than anyone could’ve imagined just a year ago. So, it’s understandable to have hesitancy or apprehension for a blockbuster trade with many moving parts especially with a team that has a bad track record. Take solace knowing that if the Knicks do gun for a star the plan for it won’t be half-baked or out of desperation. There is a clear chain of command. There will be no undermining or ownership intervention or dysfunction. There’s one head honcho now and his lieutenants know their place.

»READ: Balancing on the contention tightrope without jeopardizing future competitiveness