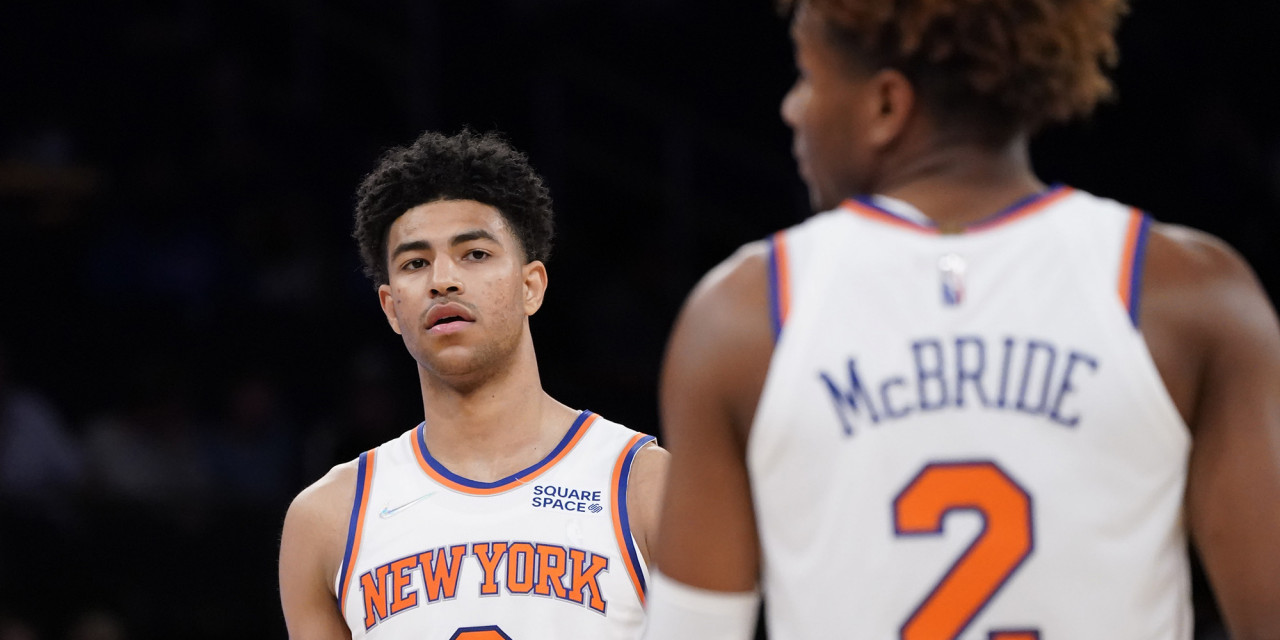 Tom Thibodeau has been stereotypically stingy with minutes even for Knicks rookies Quentin Grimes and Miles McBride in three games of preseason action.

It’s a tale as old as time: Tom Thibodeau being notoriously frugal with rookie minutes. But even with the end of this preseason coming up tomorrow against the Washington Wizards, you have to wonder whether or not the New York Knicks head coach will hand newcomers Quentin Grimes and Miles “Deuce” McBride playing time.

With veterans Kemba Walker resting and Derrick Rose nursing a pestering ankle tweak, Thibodeau stuck with familiar faces in Thursday night’s win against the Detroit Pistons with Immanuel Quickley and Alec Burks picking up the slack. Rose and Quickley combined to play 47 of the 48 point-guard minutes yesterday as teams across the league rested key contributors.

Thibs so ready for the regular season lmfao😭 pic.twitter.com/MIuHlXwTyF

We don’t have to look too far back on Thibodeau’s illustrious coaching career to see this trend. Immanuel Quickley, who shined in Summer League action this year, was relegated to the bench last season in favor of Elfrid Payton. His rookie counterpart, Obi Toppin, was utilized even less so than Quickley. Toppin only averaged 11 minutes per game compared to Quickley’s 19. If we look even further back to the 2011–12 season, Thibs only gave around 11 minutes per game to then-rookie Jimmy Butler. In fairness, his usage only went up from there during their time together in Chicago as it became evident that Butler was a budding star, but we did not know this until his minutes were raised. Additionally, with Mitchell Robinson and Nerlens Noel missing preseason thus far, rookie big man Jericho Sims, on a two-way deal, has played enough behind Taj Gibson.

Grimes and McBride played fairly well during Summer League, averaging around 15 points per game between the two players. Their respective skill sets aren’t exactly unnecessary for the Knicks right now. Grimes, in his flash of play in the Knicks’ preseason game against the Wizards, shot a pair of three-pointers in just under two minutes for his only six points so far in preseason action. The Knicks could use a quick trigger like Grimes, as players and the coaching staff have all mentioned in pressers in recent weeks that the team wants to take and make more three-pointers to open up the floor for even better shot creation.

As for Deuce, for a defensive-minded Knicks staff, there is hope for his usage. McBride has too many highlights to choose from during his time at West Virginia, but his masterful work against no. 1 overall draft pick Cade Cunningham and Oklahoma State during the Big 12 Conference this year is a must-see. He showed flashes of solid offensive skill during Summer League as well.

Villains in movies always seemed wrong, at least from the lens of the hero who needed to save the day. But when you really broke it down, they usually had a point. Thibs can definitely come off as a basketball villain; pushing his starters to the brink, rarely giving rookies a shot. But looking at how it worked out for Toppin and Quickley, it’s too early to say that we can break out the torches just yet regarding Grimes’ 2.4 minutes and McBride’s 3.1 minutes averaged so far in preseason. Only time—and health of the Knicks’ go-to guards—will tell us how often these neophytes see the hardwood this year.