Brick by Brick: The Value of Second-Round Picks

A second round pick is like flour; on its own, you can’t do much with it, but when mixed with eggs and sugar and a good recipe, it starts to become something.

The Knicks already possess two 2018 second round picks. As of February 6, those picks would land 36th (from Chicago) and 45th (as part of a swap with the Clippers).

With the trade deadline rapidly approaching and rumors swirling about Willy Hernangómez, don’t cast aside the idea of the Knicks acquiring an additional second round pick. It could be a key ingredient to a larger recipe.

Successful people will usually tell you that their success is the byproduct of hard work and luck. This is true in business and in life. Think about something that you have accomplished, remember the work you put in to do it, and then think about the breaks that went your way to make it happen.

In the draft, luck is the result of opportunity. It’s simple probability: increase the number of dice rolls to increase the chances of landing on a particular number. The more picks a team has in their possession, the more likely they are to turn one into a good player. It doesn’t always work that way, since teams miss sometimes with even the best odds, but it’s always better to have more chances to succeed than fewer.

The problem when assessing the value of draft picks, however, is that you never know which pick will hit the jackpot, or where you’ll go bankrupt. In the first round of the draft, it’s a bit easier. We know from years of results and somewhat careful vetting that the best players are usually found in the lottery. Later in the draft, though, it becomes less obvious, and even more so in the second round.

If draft picks are such a crapshoot, especially in the second round, why would the Knicks trade Willy Hernangómez for a second round pick?

Note: Reports indicate the Knicks are looking for a significant return for Hernangómez, but if you look at the current market, using the recent Tyler Zeller trade as an indicator, a high second round pick might be the best they can hope for.

It doesn’t seem long ago when Hernangómez was an untouchable young asset in the Knicks organization. But after the acquisition of Enes Kanter and a renewed emphasis by the coaching staff on defense, the 23-year-old Spaniard has found himself attached to the bench on most nights.

Of course, roster construction doesn’t help Hernangómez, who shares a position with four other bigs in Kristaps Porzingis, Enes Kanter, Kyle O’Quinn, and Joakim Noah—some of whom might represent better trade options than Willy, but we will leave that aside for now.

If Willy’s recent request to find playing time or be traded is upheld, then the Knicks will likely find themselves in a position where they’ll be forced to move him instead of their other bigs.

It’s possible that the Knicks could get more than a second-round pick for Hernangómez, but for the sake of understanding the value of second-round picks and why the Knicks might be inclined to deal for one, let’s work in the context of maximizing the potential talent pool in the second round.

Research shows that second-round picks are most valuable in the 31–40 range, but much more volatile than the top 10 picks of the first round. This is why stockpiling picks in the second round becomes important—one additional chance, one extra opportunity, one more acquired draft pick could be the difference between finding a diamond in the rough and just missing one.

Using data from 2001–2015, and categorizing players into different tiers, the research shows how often teams have found a useful player (defined as at least a below average role player) within different pick ranges.

Remember, the Knicks are currently slotted to pick 36th (with the Bulls pick) and 45th (after a swap with the Clippers). This gives them a 40 percent chance at finding a useful player between those two picks, based on data stretching back to 2001.

What would an additional pick do to their odds? We know that Dallas is interested in Hernangómez, and they currently own the 33rd pick in the 2018 draft. The 33rd pick alone carries a 53.2 percent chance of churning out a useful player. It would also increases the Knicks’ overall chances of finding a useful player, with what would then be three second-round picks, from 40 percent to 45 percent.

If the numbers don’t illustrate the case for acquiring second-round picks, then let’s look at some specific examples: 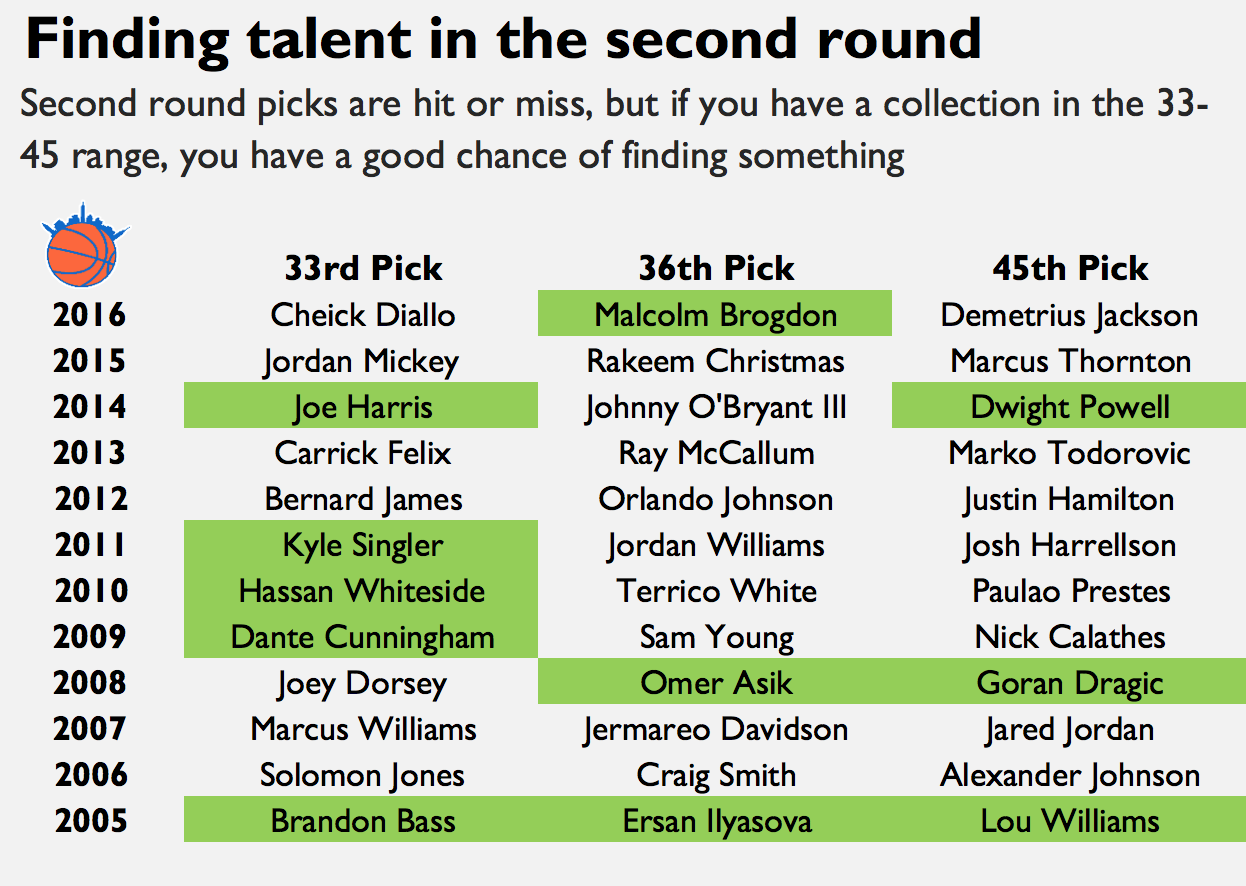 The table above shows every player drafted with the 33rd, 36th, and 45th picks between 2005–2016. While there are plenty of no-names, it’s surprising to see how many good players are on the list, including last season’s rookie of the year Malcolm Brogdon. We also see that the most hits happen with the higher picks (more good players were drafted 33rd than 45th), but you never know which draft will have a Lou Williams or Goran Dragic sitting at the 45th slot.

Again, the more opportunities a team is given in the second round, the more likely they are to find a solid player. Scouting has a lot to do with it. Fans might not trust the Knicks to find a second round talent, but why not? The organization has done a lot wrong in recent history, but their draft record has been fairly strong, including finding Hernangómez himself with the 35th pick in 2015 (via a trade with Philadelphia).

Not knowing which draft pick is going to turn out to be a strong player is what makes the dichotomy between current assets (roster players) and future assets (draft picks) so difficult to balance.

A player’s trade value can be analyzed in a vacuum—does the return equal the value of what is traded? The alternative is to evaluate the trade in the context of a larger plan—does the return add unique value to other assets?

So, why trade Willy Hernangómez for a second round pick, you ask?

As we discussed earlier in the article, you never know which pick is going to hit the jackpot. You trade for an additional pick because the marginal value of a third 2018 second-round pick might be enough to turn several small ingredients into a delicious recipe.

Kevin Pelton recently updated his NBA Trade Value chart to account for the surplus value of each draft pick beyond their rookie-scale contracts. While the values displayed on this chart are only the product of an individual analysis, it is a fair representation of how smart executives in the league might value different draft picks: 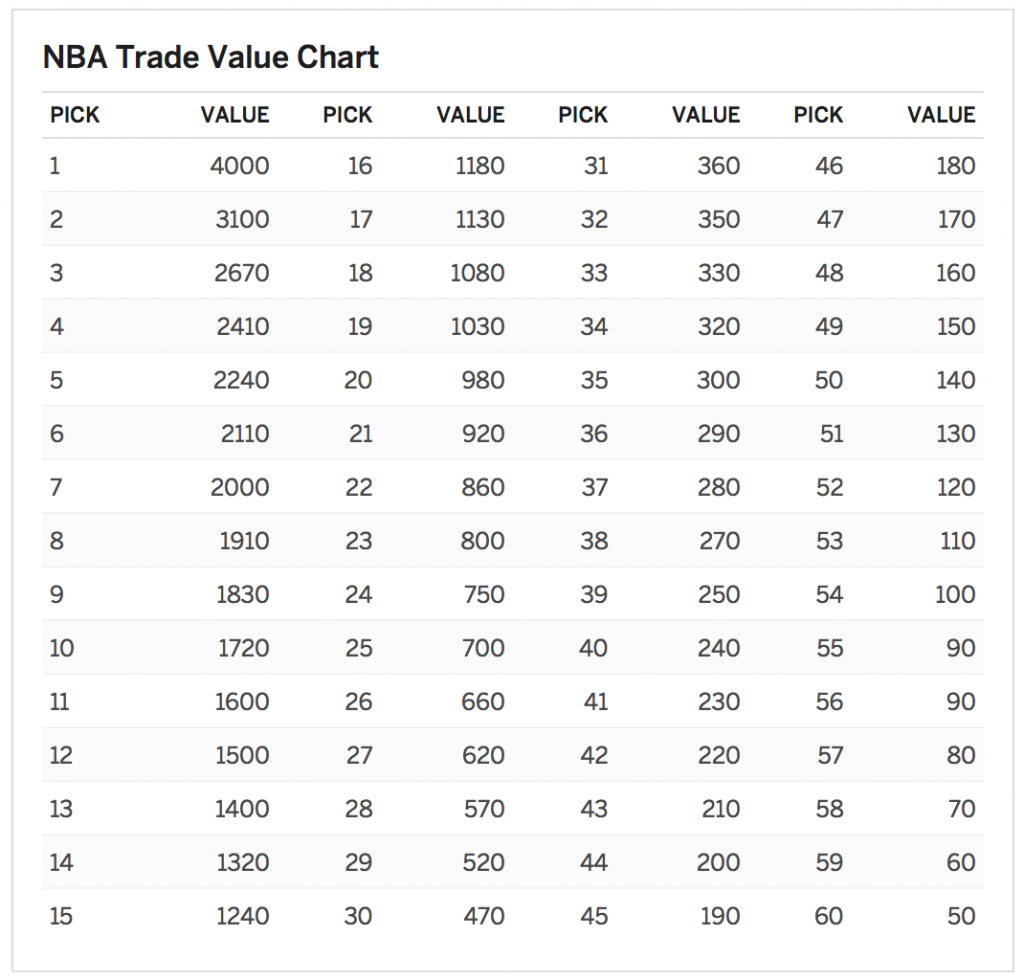 Using the values on the chart, we can see how the marginal value of adding one additional pick to the Knicks current collection could be a difference maker.

If we take the value of the Knicks’ current second round picks (36th + 45th), the combined trade value (290 + 190 = 480) barely gets them into the first round. But if they were to acquire the 33rd pick from Dallas in exchange for Willy Hernangómez, cobbling together the 33rd + 36th + 45th pick suddenly gives them enough value to reach as high as the 23rd pick. Stay with me here.

The Knicks also own what today would be the 10th overall pick in 2018. If they were able to trade three second round picks for a late first round pick (say, 23rd), those two first round picks (10th + 23rd) could equate into enough trade value to acquire a top five pick (fourth overall using Pelton’s chart).

A lot of “what ifs” and “this building on that,” but this is just one example of how a team can use what initially seem like insignificant pieces (a second-round pick) and package them together with other pieces to create something of value.

Success is a byproduct of hard work and luck. You never know which little break along the way will make a difference. Could we someday be talking about how the Knicks were able to draft a future star player because they were able to acquire one additional pick to use in a package to trade up in the draft? Maybe! Could that acquired pick turn out to be the right pick in the second round that nets a late draft steal? Maybe!

So while trading Willy Hernangómez for a second-round pick might not seem like much at first blush, it could be one of those small moves that furthers the journey down the path to something bigger.