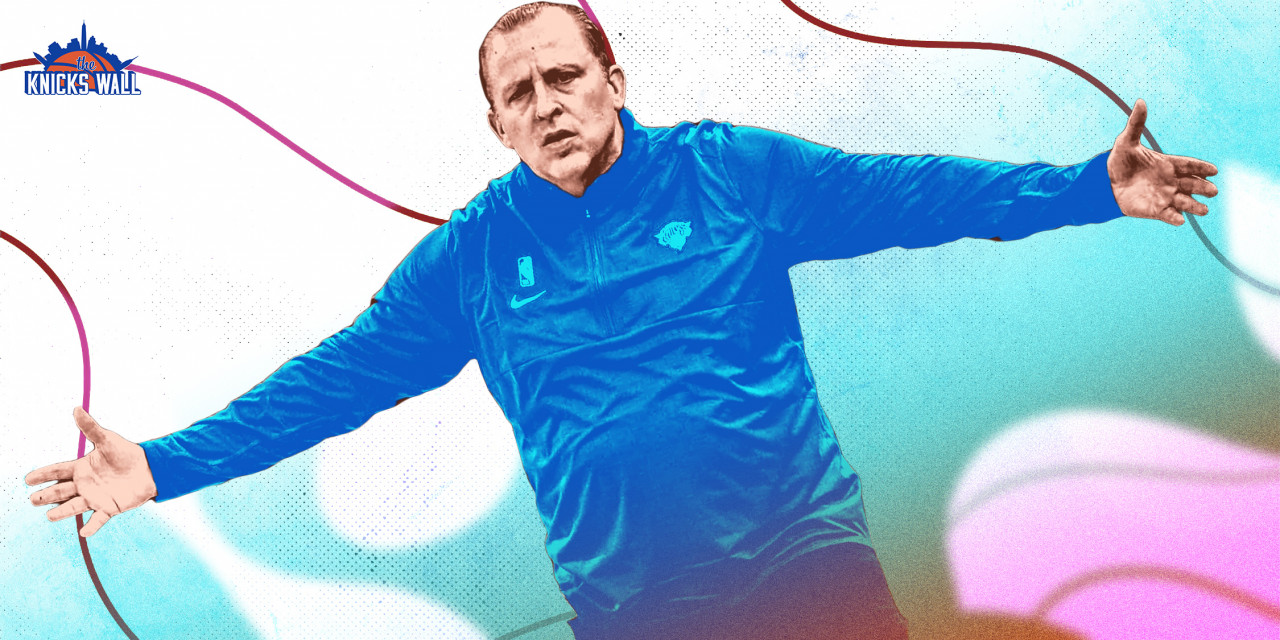 The Knicks shook up their rotation by sliding Kemba Walker out and elevating Alec Burks to the starting unit. There’s more tinkering to be done to get New York really going.

Before he signed with his hometown New York Knicks this past summer, Kemba Walker introduced himself to Madison Square Garden in just about the loudest possible way. In 2011, he drained that stepback, the ankle-breaking game-winner that sent Gary McGhee into the abyss of New York City’s subway system.

Nevermind the fact that he played for a college in Connecticut at the time, and would go on to be a player for a team in Charlotte, then in Boston, and for about 10 minutes, a team in Oklahoma City. Kemba was, is, and always will be a city boy—a product of the Big Apple a hero born in the Mecca, a legend in his own right, his own way.

Legends, though, can fall. On Monday, Tom Thibodeau announced that, “as of now,” Walker is out of the Knicks rotation. He said he plans to tighten the rotation moving forward. “It would be tough to play three small guards together,” Thibodeau noted, also saying that he has great respect for Kemba. For some, it’s a heartbreaking development. But for the Knicks, it’s a necessary one.

Inserted in his place has been Alec Burks, averaging an effective 10.5 points, 3.8 rebounds, and 1.8 assists per game. They aren’t exactly point-guard-like numbers, but who needs point guard numbers in a league that increasingly loves its quasi-point guards? It’s not like Walker has been quite the trailblazer this season; Burks has been far more efficient than Walker, thus have been the Knicks.

A statistical summary of why the Knicks are pulling Kemba Walker from the rotation:

They are 27th in offense with him playing, 9th with him off.

“I just don’t like the way we’ve been trending, the inconsistency of our team and we’re gonna try to make a change,” Thibodeau said about switching to the 6-foot-6 Burks. “I want to get bigger…I want our defense to be more intact… The size is the big thing. It makes us bigger. We’ve got small guards and you add [Burks] to the mix, it gives us size at that position. It allows us to do things that are beneficial to the group. So the big thing is getting bigger. At times we play very good defense. Other times, we haven’t. Twenty games into it, we want to take a look at something different.”

Now, does Kemba sitting change the course of this season for the Knicks? At the very least, it’s unlikely. The team’s struggles exist far beyond Walker, but at the very least, New York’s productivity on either end might increase. Burks’ on/off differential isn’t earth-shattering, but it’s certainly better than Walker’s, and it offers the Knicks a much-needed fresh start. Just two days ago, Thibodeau said he wasn’t sure what he planned on doing with the starting spot that now goes to Burks, but his decision allows the Knicks a bit more leeway in terms of what they wish to look for offensively.

Over the last six (or so) games, Burks has been an electric offensive presence, averaging 15.3 points per game on 45-52-86 shooting splits. But beyond Burks lies the future, the presence of Immanuel Quickley, who’s been hitting his stride of late; his last 11 games have been quite promising, as the sophomore has averaged, 12.3 points on 47-44-92 shooting splits. Those who have been begging for Quickley to become more involved in the offense should be rejoicing.

There’s plenty more to be done, though. The starting group of Walker, Evan Fournier, RJ Barrett, Julius Randle, and Mitchell Robinson has played the most collective minutes out of any five-man group in the NBA this season, and their net rating of -15.7 is abysmal. Walker’s inefficiencies are a watermark on this season, but that’s not to say that it can’t be removed. It’s also not to omit the fact that Fournier has been an overwhelming disappointment, Randle has hardly been the revelation he was last season, and that the center position has spent much of this season in the ICU, leaving Jericho Sims stranded on an island where only he can find a source of food.

Perhaps it’s time for the Knicks and Thibodeau to explore alternate lineups beyond the mere swap of Walker for Burks. That’s not to say that Obi Toppin should be starting over Randle, or that Barret should be making way for Quentin Grimes. But there may just be some sense in fiddling with rotations beyond the most glaring problem. It’s well-documented that New York’s starters have screwed the pooch of late, and for Thibodeau to search for answers is a natural next step.

Is Toppin the answer?

GRIMES TO OBI ALLEY.
INJECT THIS INTO ME.
YOUNG BULL SZN. pic.twitter.com/A1TNiXHKxB

In all seriousness, though, perhaps it’s time for Toppin to be let out from behind the protective barrier that separates rookies and role players. Obviously, he’s no longer the former, and with every performance, he grows into a sensible distinction as the latter. Beyond his explosive finishes above the rim, he’s been a crucial contributor in terms of starting fast breaks and forcing stops on defense. He’s a real-life energizer bunny whose grit and motor tend to cause the offense to excel in ways it’s not typically used to excelling. No, seriously; he’s an elite transition presence, one that redefines the Knicks’ offense each time he’s on the floor.

The same goes for most of the Knicks’ bench presence. As TKW’s Patrick Diaz noted yesterday, “The Knicks’ bench is their strongest asset, as they rank fourth in the NBA averaging 40.4 points per game. Thibodeau’s main reserve unit consists of Derrick Rose, Immanuel Quickley, Alec Burks, Taj Gibson, and Obi Toppin. Though they’ve only played 89 minutes, they consistently bring the Knicks back into games as highlighted on other occasions. However, the trigger isn’t pulled on them nearly enough. That group posts a better Defensive Rating than the starters at 84.2. It’s safe to say that something has to give. Whether Thibs knows that Kemba isn’t the sole change needed to be made is a separate conversation.

That there is a change to be made, and that Thibs is willing to make it, is, at the very least, a start. But for the Knicks to return to last season’s form—that of an upstart, energetic, exciting franchise—changes need to be made across the board. More distribution of minutes and shots. Less focus on defensive propensity, more emphasis on shot creation. A belief in the players who don’t happen to occupy the floor when the ball is tipped. These are all things that, if Thibs can get behind them, the Knicks can succeed. Without them, they’re just the Knicks. And as history tells it, that distinction is hardly a kind one.