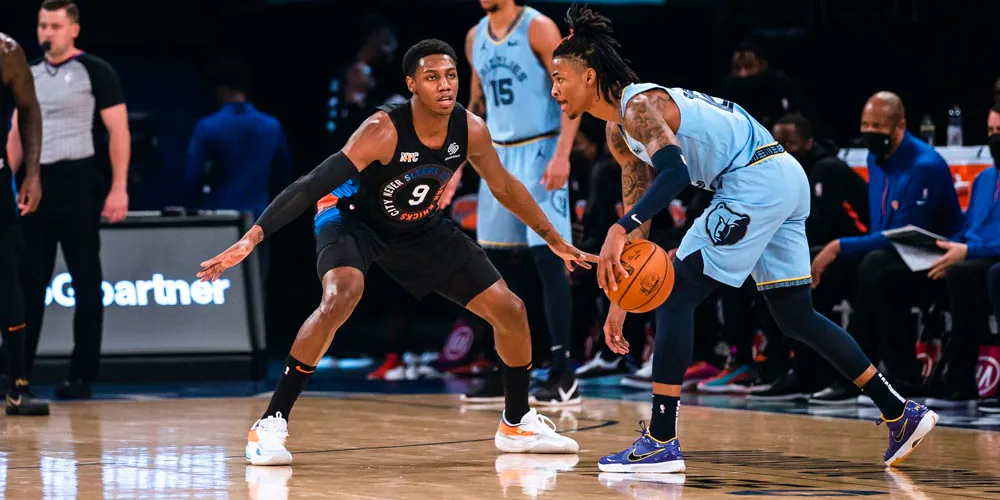 After a blowout win against the Rockets, the Knicks continue their road trip to Memphis to play a feisty Grizzlies team.

The countdown is on.

With only eight games left in the regular season for the New York Knicks (36-28), they try to solidify their spot for the fourth-seed in the Eastern Conference. It’ll be a quick turnaround for New York, coming off a lopsided 122-97 victory over the Houston Rockets on Sunday night. On Monday, the Knicks travel to FedEx Forum to face Ja Morant and the Memphis Grizzlies (32-31).

Despite Memphis coming off of a one-point loss to Orlando and being losers of three of their last four, Knicks guard Derrick Rose sees this game like any other.

“Because of the new system with the play-in games, we know that everybody is playing for something right now,” Knicks guard Derrick Rose said of the regular-season homestretch after last night’s win. “Teams are playing for spots. Every team is going to be a tough game, almost like a playoff game. If anything, this is what you want. You want to be playing your best basketball against elite players and teams. Hopefully, we take this momentum and reach the postseason with it.”

Gearing up for the Grindhouse

While the Grizzlies remain promising, their once strong homecourt advantage at the FedExForum has willed. Whether it be due to Maybe its COVID-19 restrictions and fan capacity limits that might be taking away from some of the atmosphere, but whatever it is, Memphis just isn’t enjoying the same success at home compared to past years. The Grizzlies are 14-17 at home while sporting an 18-14 record on the road this season.

The Knicks bested the Grizzlies before, beating them on April 9th in a 133-129 overtime win. It took a bit of a late comeback and push, but New York got the job done, thanks to R.J. Barrett scoring 15 of his 20 points between the fourth quarter and overtime to carry the Knicks back and complete the comeback.

In the first matchup, Memphis got a cast of characters playing well, as Ja Morant, Dillon Brooks, Desmond Bane, and Jonas Valanciunas were good, but Barrett and a bench unit led by contributions from Immanuel Quickley, Alec Burks, and Derrick Rose were just a bit better that night.

It was an important win for the Knicks, as it sparked a nine-game winning streak to catapult them up the standings. New York hit a speed bump with a loss to Phoenix, but it hasn’t lost since.

Morant is the man to watch. He shook off a two-game shooting slump with an improved 22-point, seven-assist performance on Saturday, but the Grizzlies still fell short in a 112-111 loss to Orlando. With a team-high 19.3 points and 7.3 assists per game, the young star is certainly the Grizzlies’ catalyst. As for Brooks, he can be dangerous when he heats up from deep. When he’s on, he’s on, but he’s been off the mark as of late, only cashing in on 32.5% of threes over the last eight games.

No Noel, no problem?

After leaving the game early against Houston, Knicks center Nerlens Noel’s status is uncertain for Memphis.

The seven-year center out of Kentucky has been electric since taking over for an injured Mitchell Robinson. In April, Noel averaged 5.9 points, 7.6 rebounds, and 2.6 blocks with 64% shooting. His ability to offer an eraser at the rim while being athletic enough to step out and pester drivers and ball-handlers has been huge for New York to maintain their fourth-ranked defense.

Noel’s status is uncertain, but according to head coach Tom Thibodeau, the Knicks will be ready for any scenario.

“We have a lot of flexibility, where we can do both (slide Taj Gibson and Norvel Pelle in his place or play a small-ball lineup),” Thibodeau said after the Rockets game. “We’ve prepared ourselves to do both. We’ll see how the game unfolds, but we do see, of course, where Nerlens is.”

Despite Thibodeau’s confidence, the matchup against Valanciunas is a tough one. The last time he played New York, the center finished with 20 points and 14 rebounds. If Noel isn’t ready to go on Monday, the Knicks will need someone to step up and hold him down inside.

While the Knicks found a way to win against the Grizzlies the last time out, it wasn’t the greatest game for Julius Randle in their previous encounter. Finishing with a triple-double: 15 points, 10 rebounds, and 11 assists, Randle never got going and shot only 4-of-12 on the floor. Fortunately, Barrett and other Knicks were able to spark a comeback and win it in overtime.

Sunday night was another dominant display for Randle, who piled up 31 points, seven boards, six assists, and a steal through three-quarters of work. He got some added rest throughout the fourth quarter, which is a rarity for Randle, who averages 37.5 minutes per game—the most out of everyone in the NBA.

So with a rested Randle, the Knicks will look to go 2-0 to start the six-game road trip. However, the Grizzlies made New York work in their last matchup, so they’ll have to remain focus to come away with the victory. And for Thibodeau, a plan B has to be in order, just in case, Noel can’t go.