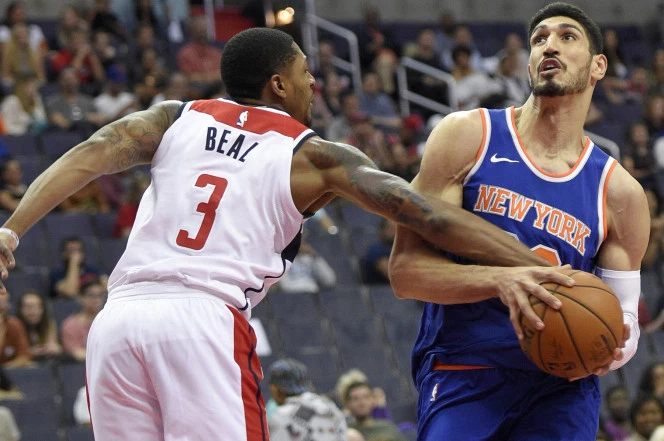 Porzingis and Ntilikina sit, Beasley and Kanter fill in for New York’s team trying to find its identity.

Waiting for the Knicks to post what the starting lineup will be for the night is an exercise in futility. Anytime the Knicks post their starters, there’s going to be a tinge of exasperation. Tonight, the result was playing Tim Hardaway Jr. at the 3 and placing Courtney Lee at the 2. At face value, it would seem like you’d want to swap them, especially with the size mismatch between Hardaway Jr. and Wizards’ Otto Porter Jr. However, that smaller lineup helped with unleashing Lee.

Lee is good for four, maybe five games like this every season. We already knew he was a good three-point shooter. Sadly, his precision was overshadowed by Carmelo Anthony, Kristaps Porzingis, and the guard whose name rhymes with Errick Ose. In short, Lee’s offense was typically an afterthought.

Now, he’s in a position to contribute effectively with his long ball on nights like this, where Hornacek opted not to play KP at all. Lee had the hot hand in the first half by letting it fly, hitting 3-for-3 from beyond the arc. He finished with 12 points, lifting the Knicks to a 44 percent three-point shooting night.

Having an open mind with the frontcourt is going to be dependent on what the opponent’s lineup looks like. With Markieff Morris out, the 4 spot was Washington’s weakness. Hornacek attacked that with Beasley playing the power forward role, and defensively, it helped in the half court. Playing a team-high 30 minutes, Beasley had two nice picks inside, leading to Knicks’ buckets on the other end. He also was active around the rim since it wasn’t as clogged by big bodies.

To be honest, the team didn’t look completely awful without KP playing. They scored 100 points and shot decently from three-point land. Notably, they got to the line enough to keep the score close thanks to Jarrett Jack, who got to the charity stripes 10 times by himself. If they can do this without KP, then consider what they will be able to accomplish when Frankie Smokes plays at full speed without KP.