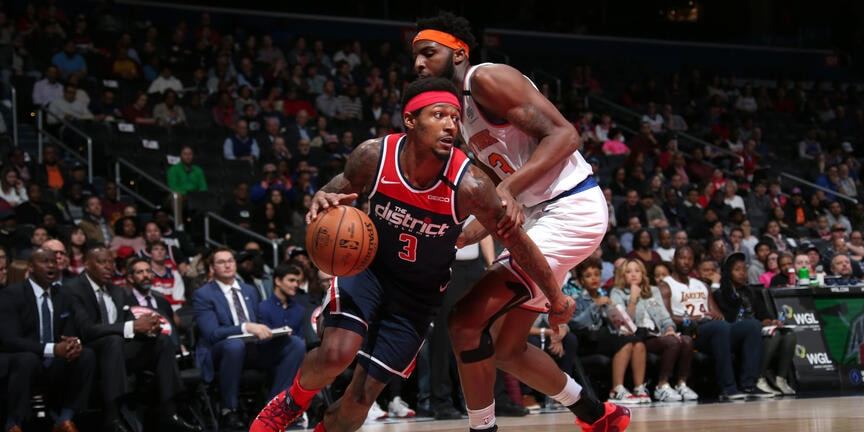 The Knicks saw their first-half comeback, led by Frank Ntilikina, evaporate in the second half against the Bradley Beal and the Wizards.

The New York Knicks (20-45)  fell to the Washington Wizards (24-40) on the road on Tuesday night in D.C., losing 122-115 in a sparse Capital One Arena as the coronavirus’ spread continues to change course to the NBA’s season. While no official announcement has been broadcast, the league could see fans barred from attending games in the foreseeable future as members of the media have already been limited in proximity to players and coaches.

New York’s bench was an emphatic factor in the comeback and eventual loss, with veteran big man Bobby Portis leading the Knicks in scoring on Tuesday, along with Ntilikina, pouring in 20 points in 26 minutes against his former team. Portis, 25, spent 28 games with the Wizards last season after being traded by the Chicago Bulls. The Arkansas product appears to have a penchant for big scoring nights against his (only two) ex-franchises, given past performances including a 28-point game against the Bulls in October and 17 points against the Wizards in December—both coming off the bench.

Tuesday also saw an aggressive outing from third-year French guard Frank Ntilikina, who started the game with three made buckets. After an early, double-digit deficit for the Knicks, interim head coach Mike Miller subbed in his entire bench, whose first-quarter run kept New York in the game, eventually taking the lead in the first frame before D.C. went up five to finish the period. Ntilikina and Portis combined to score 28 first-half points as the Knicks scored 64 points in 20 minutes following their anemic four-points-in-four-minutes start to the game.

Ntilikina finished with a career-high(!) 20 points along with chipping in 10 assists, to complete the double-double, and a pair of steals in 29 minutes of action.

Frank knocks down the 3 to secure his first 20 point game to go along with his 10 assists pic.twitter.com/o6sd3ac8yh

The Wizards were carried by their game-long hot shooting, however. While perimeter shooting to start the game did not feel as vibrant for the entire 48-minute stretch for Washington, the three-ball was essential to their victory against the Knicks Tuesday, draining 14-of-35 (40.0%). Latvian forward and Sixth Man of the Year candidate Davis Bertans poured in a trio triples of his own and journeyman guard Shabazz Napier adding another three.

All-Star (but not for this year) shooting guard Bradley Beal took over the third quarter for the Wizards, with 20 points alone in the period. Beal as been one of the most dangerous scorers this season for D.C., scoring 40 points or more 10 times entering tonight. The St. Louis native nearly took down the Knicks all by himself, tying the teams after Washington fell at the half by double digits. Beal and the Wizards took advantage of 10 third-quarter turnovers from the ‘Bockers, and more mishaps by New York in the fourth quarter capitulated to the sustained scoring from Beal to lead Washington to the W.

Clutch defense from Rochester, New York, native center Thomas Bryant and the surprise play of Napier helped Beal and the Wizards to a rare win, strangely improving the team’s home record to 16-16 on the season, though, for a 40-plus-loss team.

The Knicks play the Atlanta Hawks in the Peach State tomorrow night.