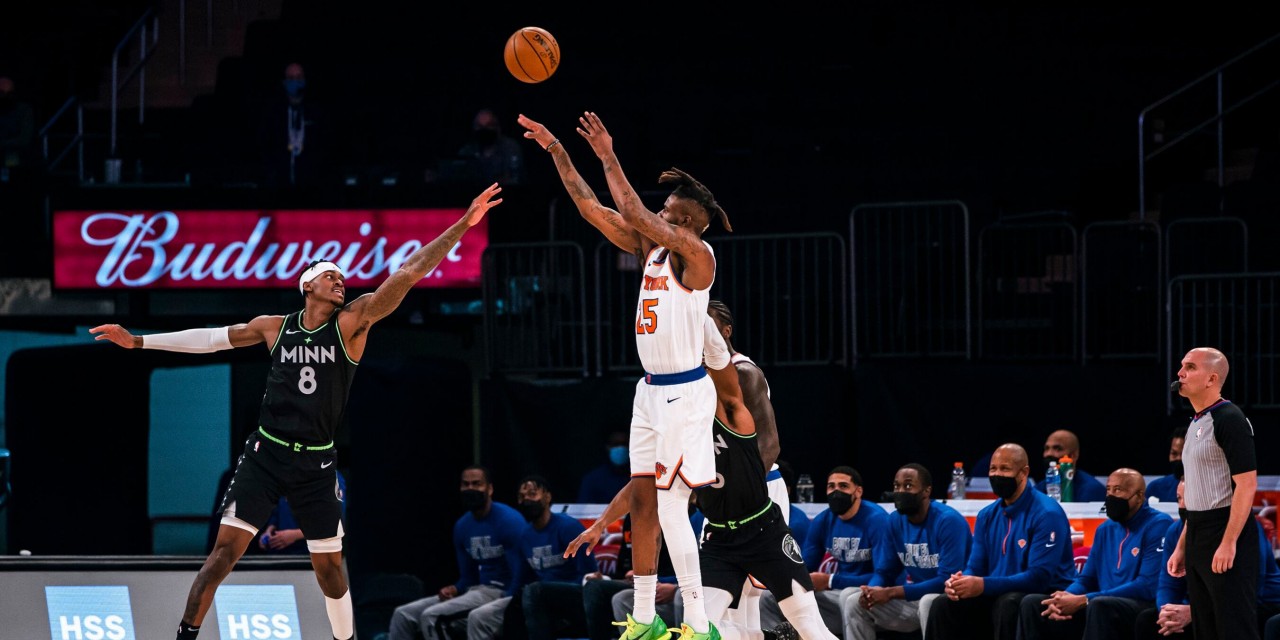 The Knicks look to regroup against the lowly and tumultuous Timberwolves in Minnesota after losing to the Heat on Monday.

Coming off of an ugly loss at the hands of the Miami Heat on Monday, the New York Knicks (24-23) head to Minneapolis to take on the Minnesota Timberwolves (11-36). In the first matchup of these two teams on February 21st, the Knicks withstood a strong fourth-quarter push by the Wolves and held on to win a close contest by a score 0f 103-99. Remember, this game was the final game for former Minnesota coach Ryan Saunders, who was fired shortly after this defeat.

Despite an interesting collection of talent, featuring Karl-Anthony Towns, Malik Beasley, and rookie phenom Anthony Edwards, it has been another forgettable year for the Wolves, who rank 23rd in points per game and 28th in point per game allowed, per NBA Stats. Minnesota owns the worst record in the NBA and has endured tons of turmoil between Saunders’ firing, the Beasley suspension, and the D’Angelo Russell knee injury, which has kept him sidelined since February 8th.

With Mitchell Robinson likely out for the season with a broken foot, the responsibility of slowing down star big man Karl-Anthony Towns will fall on Nerlens Noel and former Wolves forward Taj Gibson. In New York’s last matchup against Towns, he had a very good game with 27 points and 15 rebounds and almost led Minnesota all the way back from a double-digit deficit.

The 25-year-old New Jersey native has had a tough year off of the court, with the passing of many family members, including his mother, due to COVID-19. To his credit, this tremendous tragedy has not affected his on-court production, as Towns is quietly having another incredible season. KAT is capable of taking over a game and will likely be the focal point of the Wolves’ offense, especially if Edwards, Beasley, and company are not hitting their jumpers.

Derrick Rose is questionable this evening with a sore left ankle, per the team, so we could see be seeing a lot of Elfrid Payton and Immanuel Quickley if Rose cannot give it a go tonight. Patience has been wearing extremely thin to non-existent with Payton, who has been ineffective, to say the least.

Fans have been clamoring for a Quickley-Ntlilikina point guard tandem and it is truly puzzling as to why Payton has received this much playing time, despite his frustrating play.

In the Knicks’ previous contest against the Heat, Frank Ntilikina did not see the floor at all, while Payton saw 19 minutes of action, per ESPN Stats. You could point to Ntilikina’s offensive ineptitude as a reason for his lack of playing time, but at this point, Elfrid Payton just isn’t getting the job done on either end of the floor, so it will be interesting to see if Frank gets more of a nod this evening against a weak Wolves squad.

Tip-off is 8 p.m. ET from the Target Center.