Would Abolishing the Draft Benefit the Knicks? 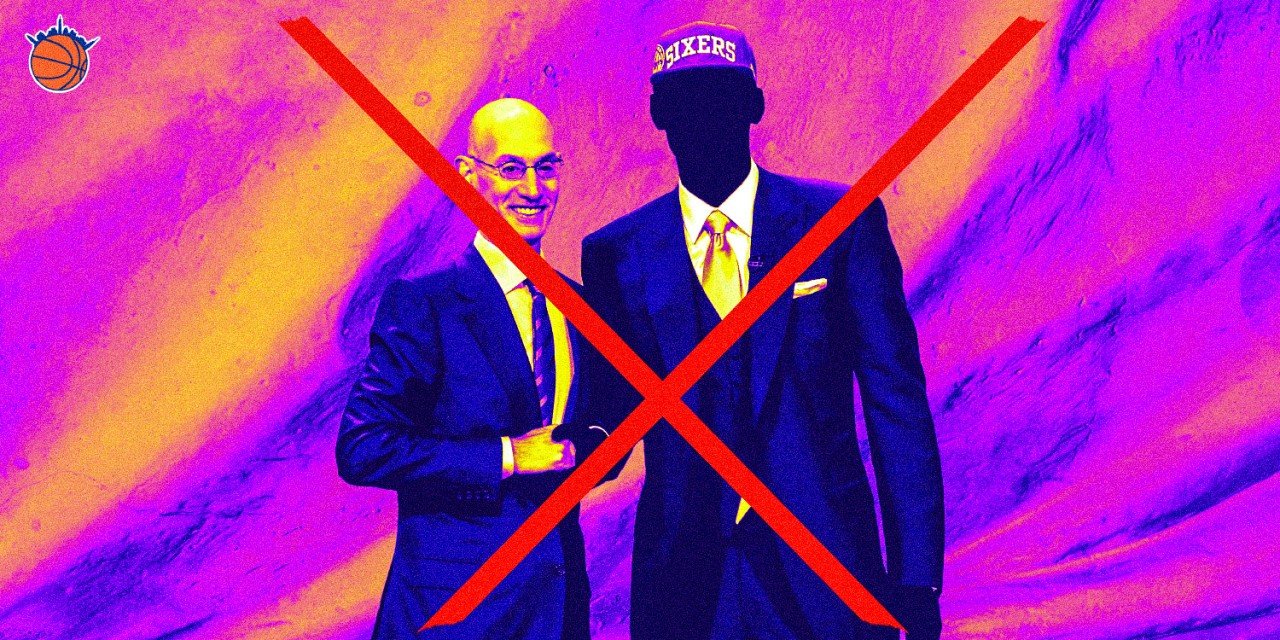 The NBA has parroted its annual draft as a means to league-wide competitive balance, but conscripting top college players to the worst teams, like the Knicks, has produced a cycle of mediocrity among the smaller market teams.

In the moment, the New York Knicks not winning the NBA’s Draft Lottery on May 14th felt like a disappointment.

Upon further reflection, it would be quite apparent to anyone that New York left Chicago’s lotto drawing still in a good place heading into a frenetic offseason, though. The third overall pick is in the bag in a consensus top-heavy draft; Kevin Durant remains a viable option in free agency, and trading down or trading for Anthony Davis aren’t off the table for the Knicks. What’s there to be upset about?

As always: abolish the NBA Draft. Let all incoming players be free agents who have their own three day signing period. Teams can make any offers they want during this time. Televise it all. https://t.co/VZLa6FMqCq

“[A]bolish the NBA Draft. Let all incoming players be free agents who have their own three day signing period. … The standard argument is…New York and LA would get all the players. … [R]ecent free agent signings do not bear that out, at least they’d have to pay through the nose for them, there’s no NBA parity anyway.”

The standard argument is always ‘wah wah parity New York and LA would get all the players.’

The last point stands out as unspeakably true especially — perhaps not in the small versus large market sense, but we just witnessed four straight years of the Cleveland Cavaliers and Golden State Warriors finals matchups. Further, conference finals matchups and playoff-qualifying teams are largely the same (not that it’s inherently pointing to stagnation; good teams tend to stay good for a window of time). But the idea that prospects entering the NBA can’t pick which team they want to play with remains lucid.

ESPN’s Bomani Jones added to the development conversation about the topic, too:

i say this every year and people act like it's the craziest thing ever. drafts are so baked into sports that people can't even consider the idea they are fundamentally unfair. https://t.co/Odbiiy6cwT

Beyond the deeply existential point about capitalism not equitably distributing resources and merits, the absence of parity in the NBA is a salient theme that plagues the league office (and thus alters the lottery odds, too).

The Knicks, who, as you know, play in New York, have the country’s largest media market and have only won a single playoff series in 19 years. They haven’t reached the postseason since the 2012–13 season; there have been, maybe, three unique “rebuild” attempts since then, too.

Their lottery luck is even worse. New York hasn’t “moved up” in the lottery era since the inaugural drawing in 1985, which netted them Georgetown center Patrick Ewing. Even with Ewing at the dais last Tuesday representing the Knicks, the team could only muster the third overall pick despite finishing with the league-worst record of 17-65.

(Actually, earning the third pick was great for the Knicks in the new odds era, but we’ve already covered that.)

In recent years at the lottery, the Knicks went from slotted at no. 2 to falling two spots (then drafting Kristaps Porzingis), falling from no. 7 to no. 8 due to a tie-breaker, and falling from no. 8 to no. 9 in the lottery. If luck is Elvis Presley, it has left the building. Madison Square Garden hasn’t been blessed with homegrown talent in a long time.

When the Knicks received the third pick, however, sadly, it determined an epoch without Duke’s Zion Williamson playing for the orange and blue. Much to the chagrin of Williamson himself even, as ESPN’s Marc Spears tweeted the presumptive number one selection was “rooting” to go to New York and had to be “whisked out” of the room when New Orleans won the lottery.

Why shouldn’t Zion get to decide whether or not he wants to play with the Knicks, though? Or, to put it more broadly, why shouldn’t any player decide where they want to play?

First, an abridged history of the draft. Sports-wide, drafts are instituted to ostensibly foster competitive balance within leagues. Worse teams receive better opportunities to lock in top talent—depending on those team’s scouting departments—and rise to the top of standings. Crucially, the prospects who sign lucrative first-round, and lottery, contracts with the bad (record wise) teams receive life-altering monetary offers. But scaling rookie deals via the draft also gives teams—and again, yes, including the bad ones with histories of poor decisions—the financial freedom to pay these players “less” than they’re worth. Scaling contracts for the best young players allows teams to lock in cheap labor.

The idea of free agency in sports didn’t exist until the mid-1970s. Through rigorous legal travails among multiple sports, even finding appeal to the U.S. Supreme Court, the deterioration of the “reserve clause” created room for the loosely defined open market.

Thus, as young players’ contracts expire (and leagues like the NBA have negotiated to institute restricted free agency and incentivize top homegrown stars to re-sign), they can discover their labor’s value vis a vis how much team or teams are willing to spend on them. This essentially backloads players’ potential career earnings in sports, and basketball, by paying for athletes’ contributions, in aggregate terms, when they’re older and have veteran-scaled contracts rather than earlier in their careers.

In other words, while franchises expect top talent to bloom from 24-28, they wind up well compensating veterans older than 30 because players were scaled back when entering the league closer to those “prime” years. (This is particularly an issue in baseball currently with cheap MLB front offices pretty openly disregarding paying players over 30-32 due to contributions despite a burdensome legal framework that constricts a player’s ability to earn as much as they can get on the open market. It’s happening to a lesser extent in the NBA with the G League and priority to hit in the second round and sign young players to cheap deals).

So, labor is getting screwed, what else is new?

We have to return to the question of why can’t players just choose where to play. Would that help teams like the Lakers, Clippers, Rockets, Knicks, and even Nets? On the surface level, the answer is probably yes. Players understand how to leverage their (very expressive air quotes) “brands” and playing next to Madison Avenue would absolutely help the ‘Bockers ink top players.

But that doesn’t account for the poor decisions by bad teams—teams that happen to reside in favorable cities, too!

The salary cap exists to limit these teams from signing “everybody.” The Knicks, even in our draft-less universe, would be unable to sign, let’s say, Kevin Durant, Kyrie Irving, Klay Thompson, AND Kawhi Leonard this summer, because they can’t pay them enough in the salary cap–luxury tax era. The NBA’s establishment of a luxury tax—which occurred in the early 1980’s—has effectively stopped teams from aproning over the hard salary cap.

Financially, it’s just not possible for the teams to pay upwards of infinity to even the incoming players (again, in our draft-less universe) due to the luxury tax. The “bad” teams that would have been given higher chances to be at the top of the draft could sign Zion Williamson or Ja Morant in a rookie free agency, and pay those players for their talents immediately.

Getting paid your worth is a win for labor, so that’s a plus.

The obvious counter-argument is: what if players don’t pan out? If Portland signed Greg Oden to a 10-year deal worth $200 million out of the gate they would be shit out of luck. But that’s the point—rewarding smart teams for correctly scouting and identifying talent, while rewarding players entering the league with lucrative contracts that don’t backload rewards to players who can stay in the league for six-plus years.

(Also, this is something that already exists, but you can insure risky contracts and give teams buyouts if a player is damaged and injured in the long term—looking at you, Mets).

In a draft-less universe, tanking would completely vanish from the NBA’s laundry list of obstacles. Adam Silver and the commissioner’s office would no longer have to wrap their heads around tanking, and could instead actually handle more pressing issues like investing in the WNBA, or grappling with the rise of injuries in the Association due to 82-game seasons.

Bad teams couldn’t tank to receive a top pick and lock that player in and incentivize him to stay indefinitely, even when they continue to miss the playoffs or continuously make bad front-office decisions that cripple the franchise (or players don’t find targets on their backs because they want to turn down better home-team extension offers and sign elsewhere.)

Tanking isn’t solved by changing the odds; it’s solved by giving teams a chance to work smarter and out-bid other organizations on talent in which they believe.

The Knicks wouldn’t benefit from the abolition of the NBA draft; although that’s a non-answer to the question of whether the league needs a draft. Certain questions are slowly but surely creeping into Silver’s office, most prominently the age for entry and the “one and done” era possibly coming to an end. The prevailing notion that bad teams—no matter the size of their city—need the draft to improve talent acquisition is foolish.

The draft in the 21st century is a round-about way to avoid paying players. For the Knicks, the lottery and draft usually mean disappointment, historically. There’s a sense that conceivably a no-draft world would pit the ‘Bockers as frontrunners for many of the star players in free agency, but knowing the team’s record with marquee names—that is, striking out more times than Giancarlo Stanton—there’s no truth to the idea New York would automatically benefit.

The truth in sports is scouting and developing are the bedrocks to successful organizations; the salary cap, luxury tax, draft, and even the lottery are solely measures to enhance financial flexibility of ownership, with some slight rewards for players, the labor.

Coaching, molding, and mixing talent on the court pushes teams into contender mode—and, for the Knicks, getting rid of the NBA draft seemingly would not improve their status as a contender until there’s real evidence in attracting star-quality players.

»READ: Filling in the gaps: complementary players to Kevin Durant and Kyrie Irving

»LISTEN: TKW Draft SZN Podcast: Is R.J. Barrett the man for the Knicks?

»READ: R.J. Barrett is a nice consolation prize for the Knicks (and their summer plans)