Would the Knicks Benefit From Rolling the Dice on a Victor Oladipo Trade? 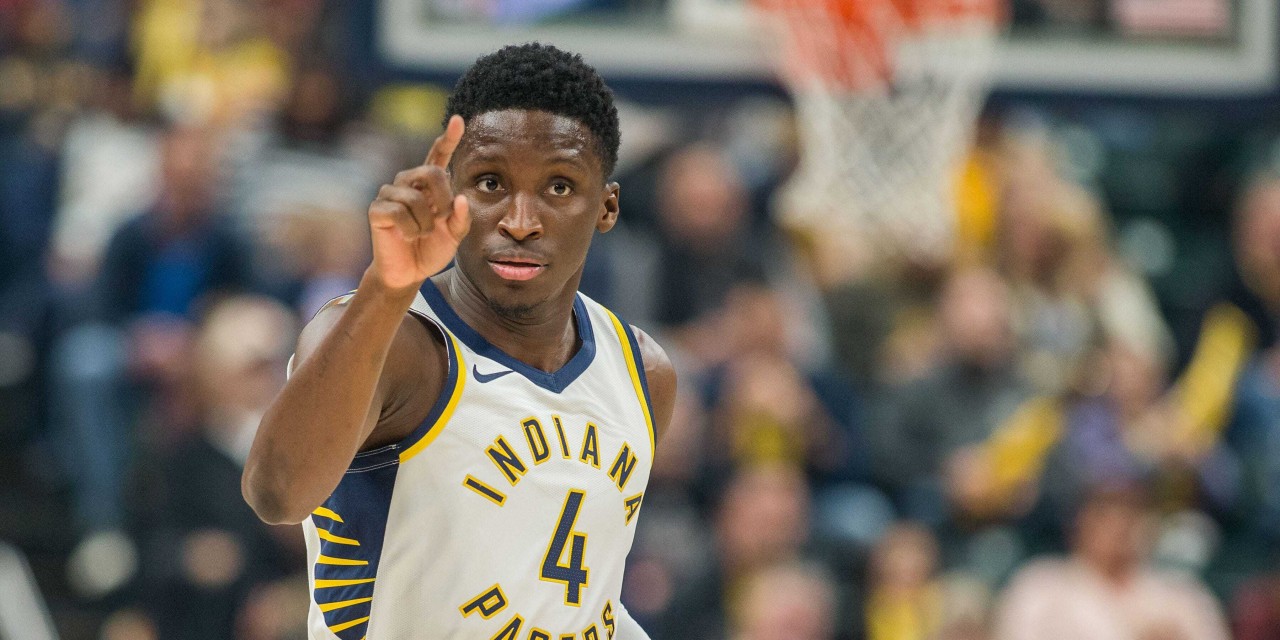 All-Star guard Victor Oladipo is rumored to want out of Indiana, but it’s not definitive if the oft-injured star would help the Knicks.

It’s that time of year again. Players are making their legends, earning their recognition as stars in the case of Jimmy Butler or unlikely NBA players making their bones. At the same time coaches are being thrown out like Jazz in the Fresh Prince or quietly let go like the original Aunt Viv. See: the newly free agented Doc Rivers and Mike D’Antoni, respectively. Taking center stage is an underachieving favorite, the Bucks and their disgruntled superstar Giannis Antetokounmpo. It’s a tale as old as time.

In the midst of all this is Victor Oladipo—the special case—who looking to move on from the Indiana Pacers according to reports by Jared Weiss of The Athletic.

There’s a lead guard on the market? Who could be discounted? While the Knicks have a fair amount of assets? You see where I’m going with this. But can the Knicks make it work? Let’s find out.

The Ballad of Journeyman Victor Oladipo

Victor Oladipo, a former Most Improved Player winner, averaged 23.1 points, 5.2 rebounds, 4.2 assists, and 2.4 steals per game in his breakout season while shooting 37.1% from behind the arc. It had all the things that usually come with a traditional MIP candidate: a can’t-get-right player finally gets right and earns their first All-Star selection. The most recent winners, Pascal Siakam and Brandon Ingram, were very much in the same vein.

Unfortunately, his production has tapered off due to a quad injury in January of 2019 and the subsequent year long recovery. In the 19 regular-season games he played in the 2019–20 season, Oladipo averaged 14.5 points, 3.9 rebounds, and 2.9 assists per game while shooting 31.7% from three and 39.4% from the field overall. Those are worse than his pre-MIP numbers.

His time in the bubble wasn’t much better. His 16.0 points, 5.7 rebounds, and 2.8 assists on 40.0% shooting wasn’t much of an improvement in the seeding games, and in the sweep against the Eastern Conference’s 2020 champion Miami Heat, he scored 20 or more points in the last three while shooting under 40%.

It’s easy to see why the Pacers aren’t too high on him anymore. He’s 28, coming off an injury, and honestly, they’ve learned to live without him. Between Malcolm Brogdon, T.J. Warren, Domantas Sabonis, and Myles Turner, there’s a well-balanced, talented starting four. There’s only one ball and it primarily belongs to Brogdon.

So, it looks like Oladipo’s meteoric rise and fall is already among us. So, why would the Knicks want him?

For one, the Knicks need a lead guard. ‘Dipo spent the majority of his time at point guard only once, during his rookie year, but, as demonstrated by plenty of the non–point guard dominant teams in the playoffs, the role of initiator is no longer limited to the 1 spot. Last season New York put R.J. Barrett at the point in random spots and it wasn’t disastrous (mostly). Ignore the fact that the Knicks were so desperate for a point guard they threw an uninitiated rookie into the fire for a second and acknowledge that the role they were looking for was an initiator or playmaker.

If there was one thing Oladipo excelled at prior to his injury it was getting to the rim. In his first All-Star season he shot 67.2% at the rim on one attempt shy of 400. The following year, when his injury occurred, he shot only 60.2% at the rim (per Basketball-Reference). The truncated NBA season along with a wobbly start mark his 2020 numbers at 45% on 70 attempts. Easily very awful, but wouldn’t you stall out an All-Star coming out off of a debilitating leg injury? Gordon Hayward’s tragic accident has granted him enough grace spread around for over the course of two seasons. The Celtics budding talents in Jaylen Brown and Jayson Tatum might have quelled anxious fans, but he’s obviously underperformed in regard to his salary. Why can’t Dipo be given the same leeway?

In addition to being the main initiator he could be in familiar territory with a pick-and-roll game with a rim-running center.

Oladipo and Turner had a chemistry that the Pacers surely would hate to lose. In the 2018–19 season Turner shot 54.5% from passes from Victor Oladipo. Granted, not all of these were pick-and-roll scenarios, but that’s where things get interesting. As the roll man, Turner had a score frequency of 45.7% last season. Meaning, Turner scored 45.7% of the time when they ran the PnR with him as the roll man.

Now, replace the name “Turner” with “Robinson” and replace “45.7%” with “83.6%”—that’s the kind of year Mitchell Robinson had with the pick-and-roll last season. And, that was being paired primarily with Elfrid Payton, a non-scoring threat. The Knicks ranked 19th in PnR frequency in the league while the Pacers ranked 15th yet still ranked higher in points per possession on PnR.

In essence, the Knicks had one properly functioning pick-and-roll component and still managed to more efficiently utilize the fundamental play than the Pacers. With an entirely separate threat in Sabonis, it’s still a bit surprising, especially considering that Robinson only started seven games last season. A perpetual lob threat, Robinson could be the perfect recipient of some sweet dimes from Oladipo or play the perfect decoy for a pull-up jumper or a blow for the guard. That kind of offensive pressure is enough for help defense to come and open up the floor for a shooter around the arc. That’s a separate issue the Knicks could address this offseason, but, for now, let’s focus on what ‘Dipo can do.

As fish-person Mark Zuckerberg purports every time he has to answer for his crimes against democracy, let’s let the market decide (the price for Oladipo). The second overall pick from the 2013 NBA Draft has seen better days as we’ve noted above, but it’s highly doubtful the Pacers will let him go for nothing. He’s not a highly sought after player, at least not anymore, but there’s always room for a lead guard who can play both sides on the floor.

With Eric Bledsoe on the trading block and Antetokounmpo dreaming about greener pastures, the Bucks would be more than willing to do a one-for-one trade if it were possible even though their last encounter with the Pacers in free agency did not end well. However, everyone seems to be low on Bledsoe, too. And, it’s doubtful Indiana would let Donte DiVincenzo sit there and continue to collect dust. That price may be too steep for a Bucks team that was just caught with their pants down.

The Celtics have been linked to a trade rumor where Turner and Oladipo would go to Boston and Hayward would return to his home state of Indiana. If Boston was willing to give up enough draft assets, they could dump Hayward onto Indiana. It would bolster them in both the front and the back court even if Daniel Theis is required in the trade. This may be the best package available for Indiana.

So, where does this leave New York? They’d have to be creative and pay a painful price. They’re thirsty for a point guard. The last half-competent point guard the Knicks had was Raymond Felton. AARP card-carrying member Jarrett Jack does not count. Oladipo is a two-time All-Star who could have multiple 20-point averaging seasons in his future under the right conditions. I’d bet money Tom Thibodeau would love to have Oladipo on his team. It would take at least one first-round pick and then making the salaries work.

If a trade were to hypothetically happen today, New York would possibly give up the eighth overall pick, Taj Gibson, Elfrid Payton and a final player. Considering the nature of this draft, the Pacers may need that final, salary-matching slot to be a player with future upside. Reggie Bullock wouldn’t cut it. They’d ask for the first-born: Frank Ntilikina.

Yes, I know that’s a steep price, but hypothetically if trade talks were to heat up, Ntilikina’s head might be on the chopping block. He’s a draft selection from two front-office regimes ago, the unlikely step-child that everyone came to love. I hope Leon Rose is as talented a negotiator as we’ve made him out to be because he will be asked about if a discussion comes up.

Victor Oladipo is not without his flaws. The Pacers see it, and the league sees it. He’ll be an unrestricted free agent a season from now. Is it too early to pull the trigger on a deal? Or is it right on time for the Pacers to cut their losses?

»READ: Should the Knicks make Malik Beasley an offer?

»READ: For the Knicks, moving into the NBA Draft’s top three needs a reconsideration