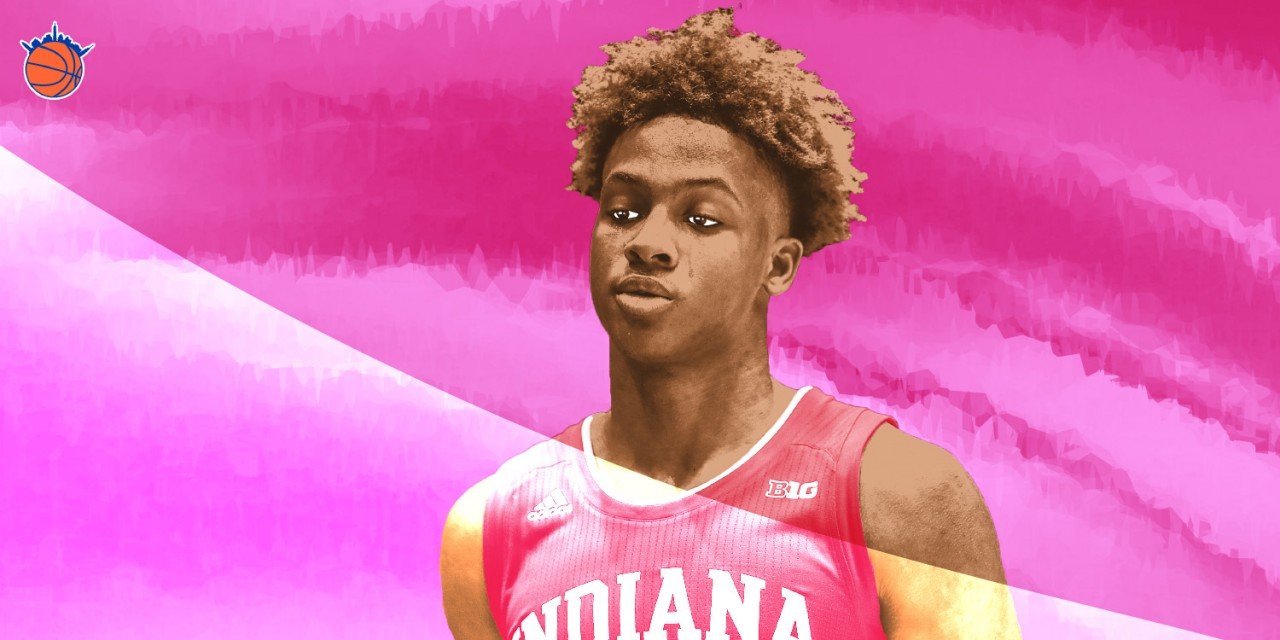 With the dust settled after the NBA draft lottery, can Romeo Langford provide much-needed guard help for the Knicks?

The Knicks Wall is setting a spotlight on the top prospects in the 2019 NBA Draft. Follow along with weekly features on the draft and players. Next up is Indiana shooting guard Romeo Langford.

Coming out of New Albany High School in Indiana, Romeo Langford was one of the most highly touted prospects in the country. The 6-foot-6 shooting guard had a decorated high school career, to put it lightly, taking home Indiana Mr. Basketball in 2018—and even scoring a whopping 63 points in a single contest during his senior season.

Langford was ranked the best shooting guard prospect in the country in the ESPN 100 and was the fifth-rated overall prospect in 2018. After significant interest from high-profile basketball schools like Duke, Kentucky, North Carolina, and Kansas, the 19-year-old decided to play college ball in his home state for the Indiana Hoosiers and head coach Archie Miller.

During his one—and only—season as a Hoosier, Langford earned Second Team All-Big Ten honors to the tune of 16.5 points per game on 44.8% shooting and 5.4 rebounds per game, per ESPN Stats. Langford’s scoring output was good for fifth in the nation for a freshman, but he was unable to lead his squad to the NCAA tournament, as Indiana posted a mediocre 19-16 record.

Despite being a household name coming out of high school, Romeo flew under the radar due to the fact that guys like Zion Williamson, R.J. Barrett, and Ja Morant were capturing the majority of the college basketball headlines.

Langford, to no one’s surprise, decided to go the one-and-done route like many of his peers and enter the NBA draft after one season as a Hoosier. He is projected to be a lottery pick due to his tremendous upside, size, and scoring ability. The guard was pretty impressive during his stint in Indiana and will be highly coveted by a number of NBA teams.

One of the most attractive things to NBA teams about Langford is the fact that he has an NBA-ready body. His 6-foot-11 wingspan and 6-6 frame already make him one of the biggest shooting guards in the Association next year—allowing him to finish over the top of larger defenders. Combine Langford’s excellent frame with the fact that he is quick and tough, and he’s one of the most elite prospects, from a physicality sense, in this year’s draft.

Langford is a very good finisher around the rim, doing his damage on slashes to the basket and on the fast break. He also possesses point guard-esque traits in spite of his “strictly” shooting guard label. He ran some point in high school, and Langford is able to use those skills to distribute the ball in an intelligent and quick fashion, frequently setting his teammates up for high-percentage looks.

A rare quality for guards these days, Langford is willing to go get a rebound and isn’t timid in that department. His rebounding numbers from the guard position are impressive, especially on the offensive glass where he snagged 1.4 offensive boards per game, per ESPN Stats.

The 19-year-old is solid defensively, despite some lackadaisical and boneheaded tendencies at times. His long and athletic frame makes him a versatile perimeter defender at the next level. Against his youth, Langford seems to understand defensive rotations, spacing, and how to avoid fouls more than most of his young counterparts.

The most glaring flaw for Romeo is below average perimeter shooting for his position. Compared to other shooting guard prospects and NBA shooting guards in general, he is not a very adept shooter at this stage of his career. Langford only shot 27% from three last season, per ESPN Stats, and struggled with his shot from outside the paint, including a mediocre percentage from the free throw line (72.7%). A nagging hand injury could be a factor in the freshman’s poor shooting, but regardless, Langford needs to improve his shot in order to fulfill his star potential at the next level.

Another downside to Romeo’s game is his decision making at times. At certain points in the season, Langford would try to force shots to create a rhythm for himself, thus stalling Indiana’s offense for extended stretches. He also has a propensity for turning the ball over in the halfcourt, and does not look comfortable handling the ball too much.

After watching Langford play this season, I liken him to Kentavious Caldwell-Pope. KCP was a lottery pick a few years back and has had a decent career thus far, finding his niche as a 3-and-D type player for the Pistons and now the Lakers. KCP doesn’t do anything particularly great, but plays solid defense at 6’5″ and is a polished shooter, which Langford hasn’t quite achieved yet.

Langford has the potential to be much better than KCP down the road, due to his physicality and higher upside. But at this point in his career, they are similar in size, defensive prowess, and rebounding ability.

Another player who comes to mind is Dwyane Wade, who himself was an excellent rebounder for a guard and who also knew how to get to the rim and finish better than most players we’ve ever seen. If Langford is able to be half the player D-Wade was, then his career will be considered a success.

With the Knicks picking third in the upcoming draft, Romeo Langford is a long shot to be taken. Langford at three would be a huge reach, and probably a big mistake, considering they could snag R.J. Barrett, De’Andre Hunter, or even Jarrett Culver at that spot.

Even if the Knicks were picking later in the lottery, or if Langford was a top-five prospect, his fit with New York is precarious at best. We learned last year that the Knicks need to add shooting to their roster, and Langford doesn’t necessarily fit that bill.

»READ: Should the Knicks trade their first-round pick?