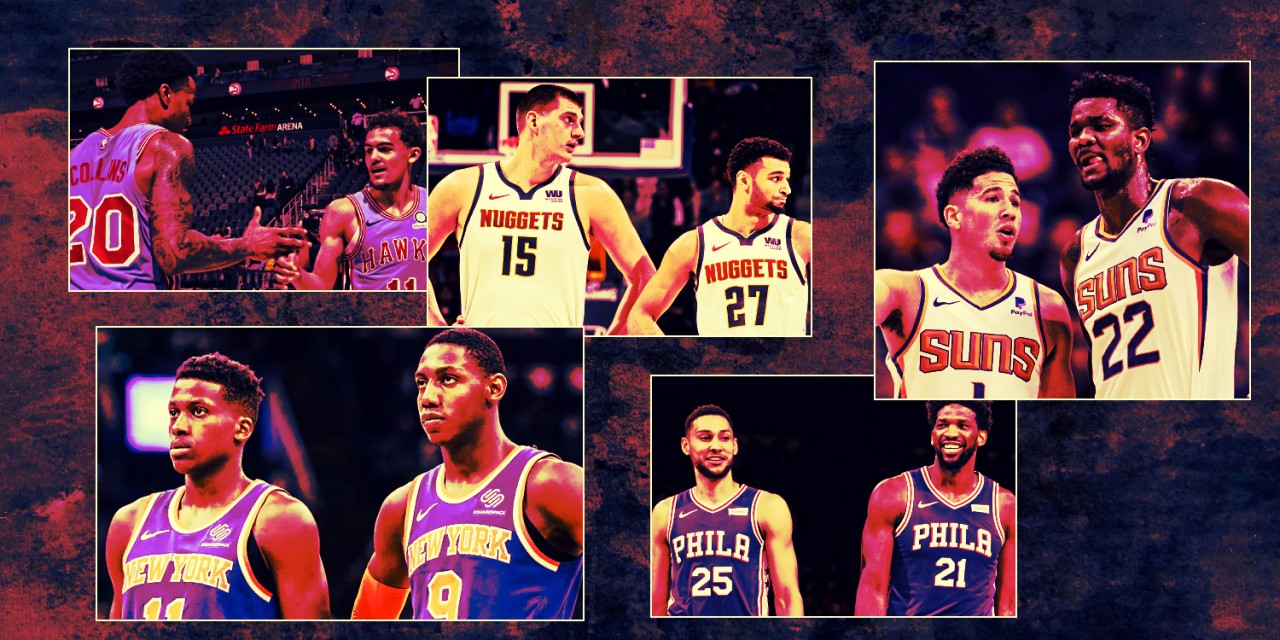 The Knicks aren’t the only team on the mend and going young, and it’s time to reevaluate where some young NBA cores stand in the NBA.

Back in July 2019, I analyzed and graded the young cores of the Knicks and four other NBA teams—the Pelicans, Grizzlies, Suns, and Hawks—and compared them on how they could potentially stack up to each other. Now that we’re more than halfway through the season and actual games have been played, we have better clarity on how the respective cores match up across the Association.

None of the aforementioned teams are serious contenders; they are more excited and focused on the future rather than the present. In fact, only the Grizzlies currently find themselves in the playoff picture, clinging to a half-game lead over the Spurs for the eighth seed in the Western Conference. Right now, it’s not entirely about winning games for these teams, it’s largely about developing talent and chemistry and laying the foundation for sustained success in the future.

It has been flat-out awesome to watch these guys on young teams blossom right before our very eyes, as they look to make names for themselves and bring their respective franchises back to prominence.

Let’s take a glance at how these five teams’ under-25 talent has looked this season, with the progress of the Knicks as a contrast, too.

The Pelicans got off to an absolutely dreadful start, losing seven of their first eight games to begin the season, and then were mired in a 13-game losing streak from late November to mid-December. Since December 17th, however, New Orleans has gone 11-6 and the young guns have been absolutely sensational at the forefront of the renaissance.

Brandon Ingram has been outstanding this season, averaging 25.6 points per game, per ESPN Stats. B.I. is a prime candidate for Most Improved Player this season and has quickly blossomed into one of the most lethal young offensive threats in the game. After a disappointing three-year stint in L.A., the 22-year-old has clearly benefited from the change of scenery and is playing awesome basketball. Looks like the Pels have got themselves a keeper in Ingram.

Another former Laker who has looked more comfortable down in New Orleans is Lonzo Ball. Whether it be injury woes, playing under the microscope, or constantly answering questions about Lavar, Ball, like Ingram, didn’t quite produce like many would expect in L.A. Zo has been very impressive this season, especially recently, averaging 15.2 points, 8.8 assists, and 7.5 rebounds per game in his last 10. Learning from Jrue Holiday has helped Ball get closer to maximizing his tremendous ability.

Role player Jaxson Hayes, Josh Hart, and Jahlil Okafor have all had positive moments this season and have been key contributors to the Pelicans’ midseason turnaround. Hayes is constantly getting better and is an athletic force down low. Hart is a very cerebral guard who can hit jump shots off the bench, and Jahlil Okafor has found a home down in New Orleans and is very crafty and talented.

Joining all this young, emerging talent is some dude named Zion Williamson, who made his long anticipated regular-season debut last night after suffering a knee injury in Summer League. Williamson is viewed as a transformative, once-in-a-lifetime player who can single-handedly alter the trajectory of a franchise. If Zion can live up to expectations, the Pelicans will be an outstanding team going forward.

New Orleans is set up very well for the future with loads of youthful talent, and we’re beginning to see it come together this season.

Another exciting young team that has been on fire recently is the Memphis Grizzlies. Memphis arguably had the best draft of any team this past June. The talent is showing out big time and the rebuild is going at a faster pace than most of us would have expected. In a competitive Western Conference, the Grizzlies would be in the playoffs if the season ended today and wouldn’t be such an easy out.

Ja Morant has essentially run away with the Rookie of the Year award with impressive stats to the tune of 17.9 points and seven assists this season. Morant has been one of the most exciting and clutch players in the NBA this season, attacking the rim with no regard and demanding the ball in crunch time while delivering in big moments. Morant plays the game with a type of energy that is infectious and his passion for greatness is undeniable. In a guard-centric league, Morant’s skill set as a combo guard allows him to flourish quicker than most. It looks like Memphis has a superstar in the making.

Overshadowed by Ja Morant’s torrent rookie campaign is the fact that Jaren Jackson Jr. is having an awesome season. Jackson is only 20 years old and his ability to stretch the floor is already incredible. Jackson looks like he’s getting better and better as the season progresses and looks like the ideal guy to pair with Ja Morant for the next 10-15 years. He may not get the love he deserves quite yet, but JJJ is nothing short of special.

In perhaps the steal of the draft, Brandon Clarke has been great in his rookie season after falling all the way to the 21st pick. Clarke was originally viewed as more of an athletic dirty-work guy who wasn’t very skilled, but he has turned heads this season. The 23-year-old has ample high-level basketball experience under his belt and has played well beyond his years.

Aside from the Pelicans, there is no team in the NBA with a more promising and exciting trio of under-25 talent than Memphis. The young guns have reinvigorated an organization that was stuck in the mud for the past few seasons. Expect the Grizzlies to be a force to be reckoned with in the West in the coming years.

The Hawks have been very bad this year (10-34) and there hasn’t been much to cheer about from a youth perspective aside from Trae Young. It feels like they are going backwards. There seems to be some frustration in the building coming from Trae Young, who is uber competitive and wants to win very badly. Cam Reddish’s struggles have contributed to the disappointing Hawks season as well. I just don’t feel the juice from their young core yet, but there is no denying that the talent is there, and there is plenty of time to get on track.

The Hawks have their point guard position figured out in Trae Young. He is a phenomenal offensive player (29.2 points per game) who is already one of the best perimeter shooters in the league. Young has got better since his rocky first-half of his rookie year and has improved his passing with 8.6 assists per game this year, per ESPN Stats. The 21-year-old has proven a lot of people wrong who thought he was too erratic and small to be successful at this level. It has been incredible to watch his season unfold.

John Collins, who missed 25 games due to suspension, is a very good player and someone Young seems to love playing with. Collins and Young have sort of a Morant-JJJ dynamic to them, and these two will be staples in Atlanta for a long time.

De’Andre Hunter has quietly had himself a nice rookie season and is a potential two-way star in the making. Hunter is a relatively low-key player, so he might not always get the attention he deserves, but the guy can flat out play.

The Suns have been surprisingly not awful this season. Despite Deandre Ayton missing a large chunk of the season due to suspension, Phoenix looks like they are finally heading in the right direction after many years of living in the cellar of the NBA standings. Ayton, along with Devin Booker, feel like they are destined for stardom; arguably Booker is already there. His shooting is outstanding and each year, the shooting guard adds more and more to his offensive arsenal, making him one of the most lethal perimeter threats in basketball.

Kelly Oubre, who was acquired from the Wizards last season, has been a good addition and really filled a need that the Suns had at the small forward position. Oubre is one of those guys who seems like he’s been in the league for 10 years but is still youthful at 24 years of age.

Role players Cam Johnson, Ty Jerome, and Mikal Bridges, are cerebral, capable from the perimeter, and multi-talented guys. They have experience winning championships in college, and have brought a level of toughness to a young Suns team that has done a ton of losing recently. For the first time in a few years, the Suns don’t feel like a laughing stock, and finally look to have established a culture under well-respected head coach Monty Williams.

Ah, the Knicks. Their struggles are well documented this season and their current collection of young talent just doesn’t seem to stack up to other franchises who were in the lottery last year. Unlike the other four teams mentioned here, the Knicks lack a star player under 25 who can be a mainstay and multiple-time All-Star for the next 10-15 years. R.J. Barrett has shown us greatness but has struggled to find consistency during his rookie season. He hasn’t popped quite yet like Morant, Ingram, and Young. Mitchell Robinson is kind of in the same boat as Barrett, flashing great potential at times, but not quite a breakout player at this juncture.

Unfortunately for New York, Kevin Knox has regressed and looks more and more like he is heading toward the bust category. Knox still looks timid, and his trajectory doesn’t look too promising either.

Fellow top-10 selection Frank Ntilikina has been decent this season and has been able to use his defense to rationalize Coach Fizdale and Coach Miller giving him playing time. But if you’re going to be selected that high there has to be some offensive juice, and I just don’t see the French point guard being anything more than a role player who comes in occasionally for perimeter defense.

Dennis Smith Jr. and Allonzo Trier have been largely invisible this season, so they haven’t really been giving ample opportunities to show that they can be important backcourt pieces of the future. Smith is looking more and more like his future should be elsewhere and Trier mysteriously has been relegated to the end of the bench in favor of veterans on one-year deals.

Looks like the Knicks will really need to hit a home run in the upcoming 2020 NBA Draft in order to really get the young core on par with the other teams around the league.