The Young Knicks Head South to Face the Wizards in Preseason 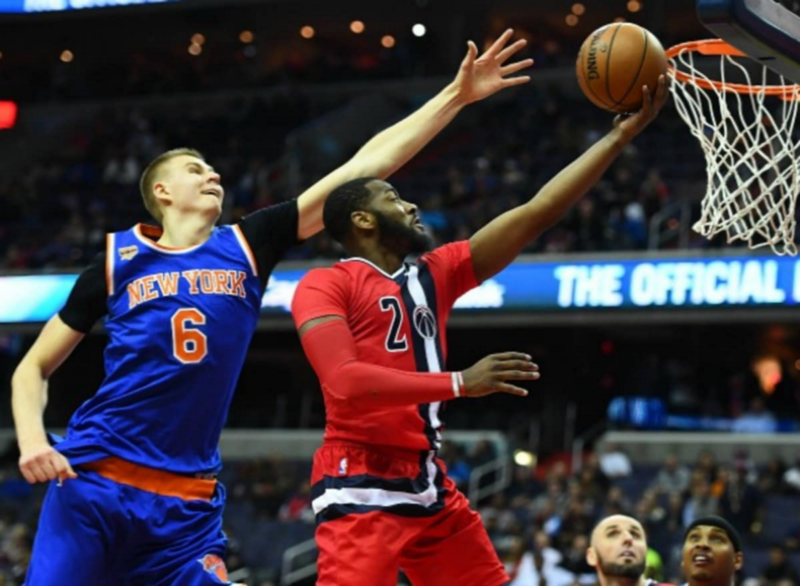 The Knicks head to the DMV to take on the Wiz Friday night.

John Wall is probably the best two-way guard in the Eastern Conference. Unfortunately, fans will have to wait another few weeks to see if the Knicks rookie point guard can use his wingspan and athleticism to slow up Wall and the Wizards’ high-octane offense.

With Frank Ntilikina out for tonight’s game, it appears that the veteran guards Ramon Sessions and Jarrett Jack will get ample playing time at the 1 spot.

Keeping that in mind, this game shapes up to be one where hopefully Tim Hardaway Jr. picks up where he left off in April during the opening round of the playoffs:

He was aggressive in the Hawks’ offense, both from mid-range and outside the arc. Defensively, Hardaway Jr. couldn’t do much to disrupt Bradley Beal’s shot. So in this instance, the best one can hope for is to force Beal into taking bad shots. However, THJ has claimed that he’s worked to improve his perimeter defense. Tonight, in the Knicks’ first unofficial match up on the road, would be a nice time to see those strides in action.

Given that Hornacek is experimenting and only left with two real point guards for the game, it’s ideal to see a defensive lineup tonight featuring Hardaway Jr. and Courtney Lee in the backcourt with Michael Beasley, Kristaps Porzingis, and Joakim Noah.

Noah may be healthy, but is he truly basketball healthy and ready? No time like now than to test that out.

Don’t let their record and postseason antics fool you: the Wizards have their own vulnerabilities. They finished the previous season in the basement of the league’s defensive ratings. Having Noah start (with Enes Kanter coming off the bench) will help keep John Wall from penetrating and force him to get his teammates–mainly Otto Porter Jr.–involved.

Although Doug McDermott started in the first preseason game, it was Beasley who played 21 minutes as the team’s small forward. At six-foot-nine, Beasley matches up well with the Wizards’ starting wing. Most importantly, with Noah on the floor, this sets the offense for high pick-and-roll plays. That should free up Beasley for some clean looks from long distance, where he shot with 42 percent accuracy last season.

On the other side of the ball, expect Beasley to play man-to-man defense. In addressing the Wizards’ propensity to run the open floor, Beasley’s awareness in cutting off the passing lane will be a crucial indicator in learning just how much emphasis the team collectively has actually put into a revamped defense.

The Knicks allowed their opponents to shoot 46 percent overall and held no advantage when it came to steals per game. If Beasley’s claim of being in the same lane as LeBron James and Kevin Durant is to hold up then seeing even a small flash of those active hands on one of the rising young wings will give a tiny bit of weight to his flimsy argument.

Also worth noting is that with only Jack and Sessions suiting up, Damyean Dotson’s minutes should see a boost as well. He’s played 15 minutes already this week. If Hornacek wants the young guys to buy in, then he has to play them. Against the Wizards’ bench is a favorable opportunity for Dotson to display more of what he brings to the team, particularly since the Wizards are still suffering at a deficit there.

The Knicks struggled mightily on the road last year due to simply not maintaining intensity for 48 minutes. You don’t want to overreact to preseason games but taking this first trip to DC will show what the team looks like without its unpredictable rookie. With KP in his new leadership role and all of the new faces, the Knicks have a shot to establish a different attitude and pattern away from the Garden tonight.