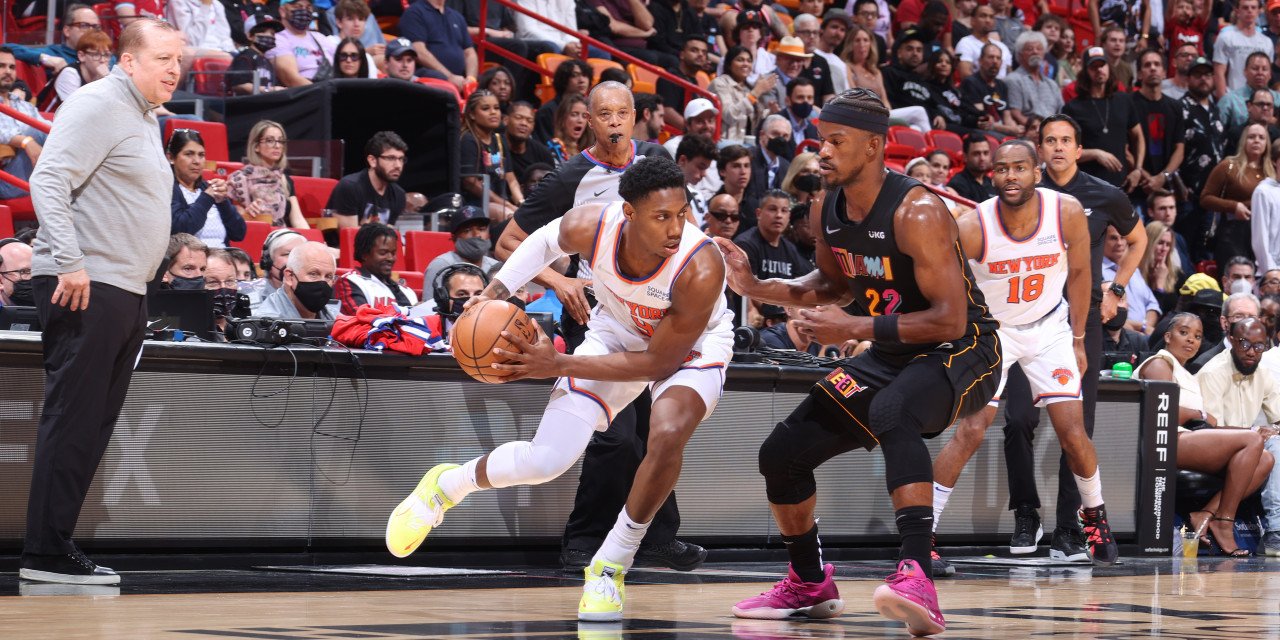 Immanuel Quickley led a second-unit takeover in the fourth quarter to propel the Knicks on the road over the Heat.

The New York Knicks (32-42) dominated the Miami Heat (47-26) in the fourth quarter with an inspired effort from Immanuel Quickley and the youngsters. The Knicks dropped the Eastern Conference-leading Heat their third straight game, winning the final frame 38-15 to flip Jimmy Butler and company on their collective head.

It’s their second straight victory, defeating Miami 111-103, after beating the Charlotte Hornets on the road on Wednesday.

Obi Toppin started his third consecutive game at power forward for the Knicks with Julius Randle sidelined with a sore quad. The second-year forward demonstrated his tangible growth from his up-and-down rookie campaign, totaling 15 points and eight rebounds.

The Knicks came out sloppy, led by Barrett with five first-half turnovers. The Heat were tough-willed following Wednesday’s (light) physical altercation between teammates and coach Erik Spoelstra, instead taking their anger out on the Knicks early. Miami held the ‘Bockers to 49 first-half points, with Barrett clearly flustered and little scoring from his teammates, including a poor shooting night from Evan Fournier (2-11 FG).

After giving up 30 points to the Heat in the third quarter, something clicked in the second unit of Quickley, Miles “Deuce” McBride, Quentin Grimes, Taj Gibson, and Jericho Sims, who started instead of Mitchell Robinson. Quickley scored 20 of his team-high 23 points in the fourth quarter alone, orchestrating a Knicks offense that befuddled Butler and the NBA’s top-five-ranked Heat defense; at one point, it was a 19-4 New York advantage in the fourth period, fueling the Knicks’ comeback.

Along with 23 points, Quickley finished shooting 50% from the field and dished out three assists along with coming away with two steals, one of which included an instinctual poke in the passing lane for a layup late in the fourth to essentially seal the game.

Coach Tom Thibodeau eventually brought back Barrett and Toppin for Grimes and Gibson, respectively, compromising after much of the season saw the reigning Coach of the Year rely on his older starters rather than the deficit-reducing second-stringers. The Heat could not muster enough late-game offense, however, with the Knicks knocking down their free throws to comfortably leave FTX Arena with the “W.” Butler finished with a game-high 30 points on 17 shots along with seven rebounds and seven assists.

KNICKS TAKE THE LEAD ON A DEEP THREE FROM GRIMES WHAT IS GOING ON pic.twitter.com/vW9KZML3g8

The Knicks finish their three-game road trip in Detroit against the tanking Pistons. The small glimmer of hope to make the play-in persists, but after losing that Atlanta Hawks game last Tuesday, it’s looking slim despite nice outings from the young Knicks today and Wednesday.