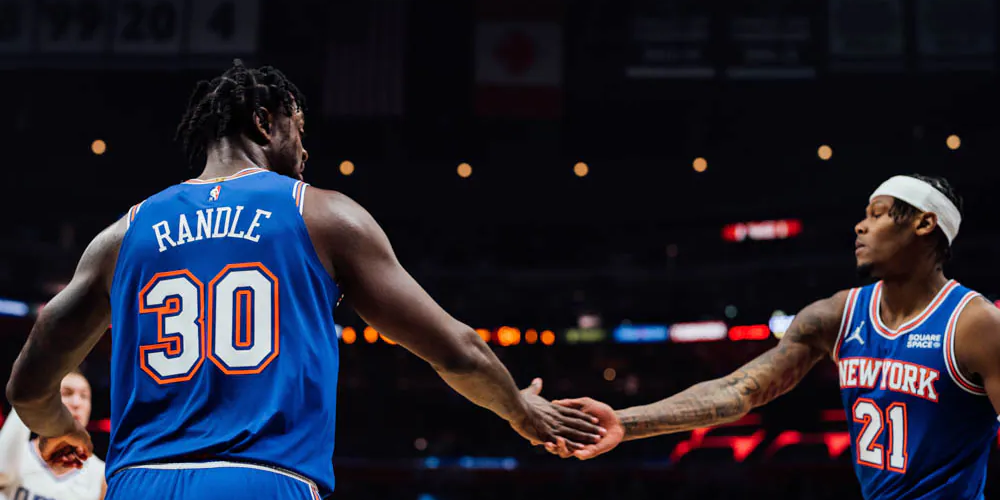 The Knicks snapped their seven-game losing streak with a win over the Clippers in L.A. with the kids, even Immanuel Quickley and Cam Reddish, chipping in.

The New York Knicks (26-38) faced the Los Angeles Clippers (34-32) for the last time this season with a chance to sweep the season series. After a devastating loss in the Valley of the Sun that ended with a Cam Johnson buzzer-beater, New York looked to get back in the win column and end a nightmarish seven-game losing streak.

The Knicks did just that as they dominated the game in a wire-to-wire victory, winning 116-93.

The Clippers are still without their All-Star wings, Kawhi Leonard and Paul George, but it hasn’t stopped them from playing well, as L.A. came into the night riding a five-game winning streak before falling to the Knicks.

Julius Randle got off to a brutal start on the night, shooting 0-for-7 in the first quarter. Despite Randle’s cold shooting, the Knicks were able to hold on to the lead early, led by Immanuel Quickley and Alec Burks, who combined to score 17 of New York’s 25 first-quarter points. Burks connected on four three-pointers in the first half.

New York’s defense was on display as they held Los Angeles scoreless for about half the second quarter, enabling the Knicks, galvanized by the bench unit, to start the period on a 16-0 run. RJ Barrett began to assert himself, scoring 16 of 18 first-half points in the second period as he continues to successfully attack the rim with confidence.

The Knicks dominated the Clippers despite missing nine first-half free throws—five coming from starting center and impending free agent Mitchell Robinson alone. They were able to take a 19-point lead into the second half. The Knicks also showed great discipline on the defensive side, committing only six first-half fouls, thus keeping Los Angeles out of the bonus compared to the Clippers’ handsy 15 fouls. New York also protected the ball well—only coughing up a single turnover in the first half.

The second half was more of the same; New York added on to their already big lead, building their leading as high as 26 points. The Clippers were able to cut into the Knicks’ lead with a 15-4 run, trimming it to as low as 12 points, but the Knicks were able to maintain their composure—something that vanished during the losing streak—and fend off the Los Angeles threat. Robinson continued to dominate the boards; after notching nine offensive rebounds in the previous game Robinson already had tallied eight by the third quarter of this game.

The Knicks began the fourth quarter on fire with a 10-0 run spearheaded by Cam Reddish, who scored a quick eight points in what turned out to be his most productive minutes as a Knick. Reddish would score 15 of his 17 points in the fourth quarter; Reddish also was perfect from the free-throw line, going 6-for-6 before a 1-of-2 trip late in the game.

RJ Barrett finished with 24 points, nine rebounds, four assists, and an encouraging 7-for-7 from the charity stripe. Mitchell Robinson tallied a double-double with 12 points and 11 rebounds to go along with a pair of blocks. Immanuel Quickley continues to regain his form, scoring 21 points; he added six assists and a career-high 10 rebounds. After a great game versus the Suns that was cut short because of his transgressions, Julius Randle struggled versus the Clippers, shooting 4-for-16 for 10 points but added nine rebounds and four assists.

The Clippers struggled all night shooting—nobody in their starting unit was able to get it going tonight. Former Knick Marcus Morris Sr. shot just 2-of-9 for four points. Nicolas Batum shot 2-of-10. Reggie Jackson struggled mightly as he shot 4-for-18 on the night including going 0-of-8 on looks from downtown.

Next up, the Knicks fly to Sacramento look to build on a much-needed, feel-good victory to take on a red hot De’Aaron Fox and the Kings on Monday night.