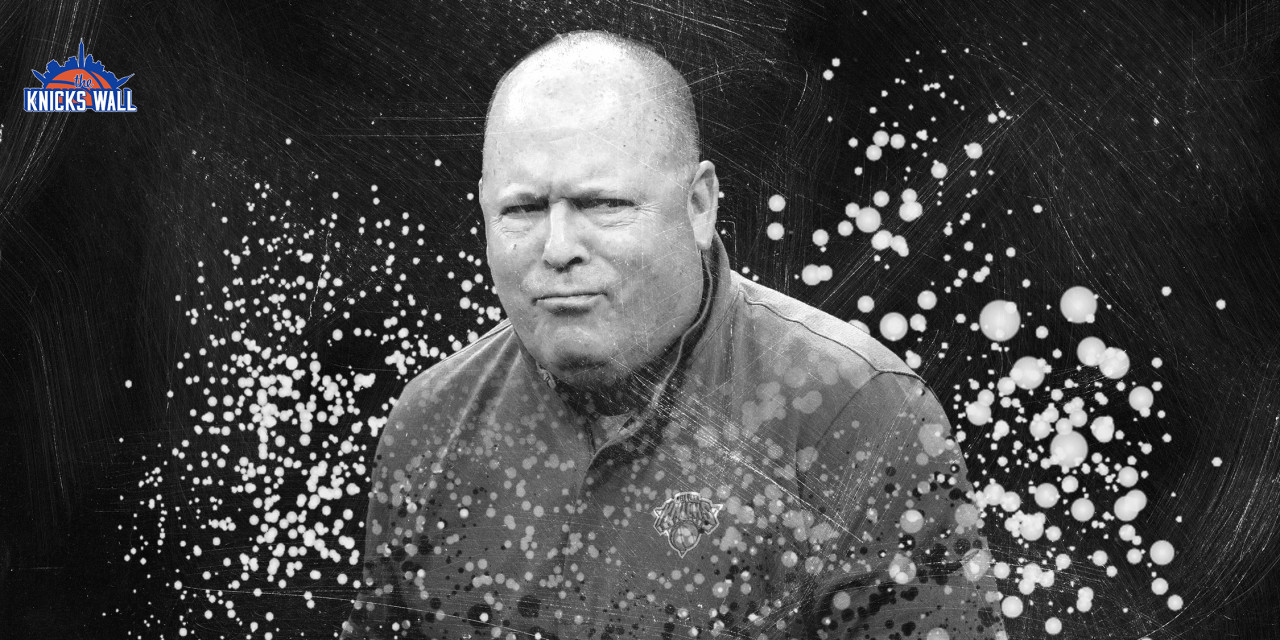 The Knicks’ front office could very well be turning optimism towards their youth with the trade deadline tomorrow. That means clearing vets and figuring out the point guard position.

It’s a question that I’ve been wondering about lately. As the Knicks sank to 24-31, I began to ask how the Knicks got here. A team that, even if you remove the team’s nine-game winning streak last season to elevate them to 41 wins and the fourth overall seed in the Eastern Conference, was a team moving in the right direction. The 2021–22 edition, however, is lifeless at its best and unbearable at its worst and I think the front office carries some of the blame for that.

In a world where we designate blame, there are three people. The first is Julius Randle, who has struggled to recapture his 2020–21 form. Not only has he reverted back to his Pelican/Laker days, but the lack of malleability in his game, whether it be his desire to be on the ball or outright refusal to operate as a roll man has the Knicks pondering moving Randle before his extension kicks in. He’s had very weird moments throughout the season, but overall, New York gambled, thinking they had a potential star-level player and he’s turned out to be a player outside of the top 50 in the league.

And even though I don’t believe he will be fired, Tom Thibodeau’s position has come under scrutiny. The second-year head coach has leaned on his veterans regardless of performance, has come under scrutiny for not trusting or playing his youth, and his rotations this season have been hockey-esque. There’s a legitimate argument that another coach who can shuffle his rotation better gets more out of this team and the roster has a proper mix in balancing the offense and defense, but it doesn’t matter because Thibodeau isn’t getting fired this year and probably isn’t this offseason either.

The front office comes in third for me, despite it being early in their tenure. This isn’t a call to dismantle the front office or that Leon Rose, Brock Aller, Scott Perry, Walt Perrin, or Frank Zanin should be removed. New York’s front office garnered praise for their role in the 41-win season of 2021—successfully navigating a good season while remaining as flexible as they can for the future. Now, the Knicks can only look back at some of the missed chances from the previous two years.

Figuring out the Point Guard Situation

If there’s a position that the Knicks have to improve on moving forward, it’s the point guard position. Not to eliminate the likes of Immanuel Quickley or Miles “Deuce” McBride from the equation, but New York’s next big investment will be a lead ball-handler who could also attack the basket. The problem is, New York already passed on some big names when they were in a more advantageous position to add one.

In 2020, Fred VanVleet checked all the boxes. An unrestricted free agent, VanVleet’s combination of shooting and defense was perfect for any team, but especially for a team that rostered Elfrid Payton the season before. Even though he was closer to Randle’s age than the vast youth, he was a perfect in-prime player who offered winning traits to a team looking to turn a new leaf. In the end, VanVleet returned to Toronto for a four-year, $85 million deal and became an All-Star the following season.

Then the 2020 draft, New York selected Obi Toppin with the eighth overall pick, over Iowa State point guard Tyrese Haliburton. While Haliburton lacks elite athleticism, he makes up for it in basketball I.Q. and the ability to leverage his size against smaller guards. Toppin remains behind Randle with no real way into minutes in Thibodeau’s rotation, while Haliburton was solid for Sacramento and is now a key piece in Sacramento’s trade for Indiana All-Star big Domantas Sabonis at the trade deadline.

Now, the Knicks are stuck looking for a point guard. C.J. McCollum drew some interest before his trade to New Orleans on Tuesday. De’Aaron Fox was a popular name amongst the fanbase, but with Haliburton now in Indiana, Sacramento will look to build around him. Collin Sexton offers the rim pressure the Knicks are looking for, but he’s currently out for the season. And lastly, Jalen Brunson, set to become a free agent this offseason, is very popular amongst the Knicks brass.

There are several, expensive ways New York can go this offseason, but if they don’t find the right point guard who can fill a void left by Mark Jackson almost 30 years ago, the Knicks will continue to struggle and the elevation of the offense will continue to be an issue and after missing out on two layups, a third miss may put the Knicks further behind other teams in the Eastern Conference.

The Knicks won 41 games last season, had the most cap space in the league entering the 2021 offseason, spend it all, and now sit several games under .500 and sit on the outside of the play-in tournament.

Regardless of what the Knicks did the rest of the season, there’s a fair argument that they wished they had the previous offseason back. Instead of getting aggressive and pursuing better players, they maintained the status quo, quickly re-signing Alec Burks, Nerlens Noel, and Derrick Rose back to multi-year contracts. To avoid any conversation about their contracts, I’m honor-bound to say that all three signed three-year deals with team options in the final year.

They used their big contract to sign Evan Fournier and then added Kemba Walker after the Oklahoma City Thunder released him. The theoretical cherry on top was locking in Julius Randle to a then-steal of a four-year contract extension, rewarding the forward after his All-NBA season. This was supposed to be the offseason that not only kept the Knicks in the upper rankings of the Eastern Conference but was supposed to elevate them as their young players took another step forward.

In retrospect, this was an awful offseason and although it pushed New York above the cap, it wasn’t the best way to go about it. Rose, Noel, and Burks are all talented players, but none of them are starters on true contending teams, nor do they have the upside to be that. For a team that succeeded with the sum of its parts, more talent was needed on the roster. While Fournier was a solid addition, he wasn’t enough and Walker has struggled as his offensive value has deteriorated.

New York’s offseason also hurt the Knicks culture and defensive structure built last season. Fournier is a sore spot defensively, while Kemba Walker has been poor defensively for several seasons now. In an attempt to fix the offense, the defense has become a bit of a mess and that could’ve been avoided if New York opted for other players. New York currently ranks 16th in the league in defensive efficiency and 24th in offensive efficiency.

Players like Josh Hart or Lonzo Ball or Gary Trent Jr. would’ve been ideal options that could fill specific roles and still offer upside. Maybe Kelly Olynyk is a step below Nerlens Noel defensively, but his outside shot offers more for a team that wanted a big who can shoot months later. Malik Monk hasn’t totally worked out in Los Angles but could’ve been a cheap add.

The recent wave of support for Fournier doesn’t change that the Knicks should’ve gone in another direction and ultimately, as the Knicks prepare for the trade deadline, three of the four players the Knicks signed this past offseason are the likeliest to be dealt.

In a world where the Knicks figure it out, the kids have to come right. RJ Barrett has elevated from this group, as Barrett’s recent play has him on pace to be a good player, potentially even an All-Star, in the coming years. For the interim, the Knicks will go as far as Randle and Barrett will take them and as the roster goes under changes between the deadline and offseason, building around Randle and Barrett is a good idea.

I’m also going to remove Mitchell Robinson from this equation. I already spoke my piece on whether the Knicks should retain him or not, but he’s out of this group as a starting center who has shown the ability to anchor a defense, provide stability on the glass, and has the upside of an ideal rim-runner with a point guard. The problem is that he’s a pending free agent and I’m not 100% sure the Knicks retain him.

It’s the next group that will sway things. Cam Reddish, Quentin Grimes, Immanuel Quickley, Deuce McBride, Obi Toppin, and Jericho Sims. If any of these guys can break out, that would be key in New York’s ascension. Maybe Sims is a viable backup center, maybe Grimes is a legitimate starting wing alongside Barrett. The Knicks need one of those things to break right in order to have a chance in the long term.

I’d also argue that the Knicks need to get the highest draft odds possible for their 2022 first-round pick. New York has several prospects, but none sparkle potential star upside. In a perfect world, the Knicks get a draft pick in the top seven, all of their young guys get playing time after the All-Star break and Randle/Barrett figures things out as Barrett takes the reigns from Randle as the team’s best player.

The New York Knicks are bad and I think the Knicks front office deserves some blame for it. The hesitancy in upgrading the point guard spot over the first two offseasons was evaded in 2021, but unavoidable in 2022 as the Knicks have struggled with point guard production this season.

And in the front office’s first big offseason, they laid an egg. Fournier is fine, but at $18 million, the Knicks needed more from their potential third cog. Walker has been New York’s third-best point guard while Rose has been injured for most of the year. Both Noel and Burks have seen their seasons wax and wane throughout the year, which makes their contracts less than desirable at the moment.

The true move for the Knicks is to pivot, opt to move some of their veterans, even on smaller moves, to allow the kids to play. Not only does it provide valuable information of a group of players with questionable upside, but it could assist in getting New York another top-10 pick, which could help with their future.

The Knicks front office took a hit between this past offseason and the team’s poor start to this year. Now, less than 24 hours before the trade deadline, New York’s front office can make a change and turn the season around by leaning on their youth.