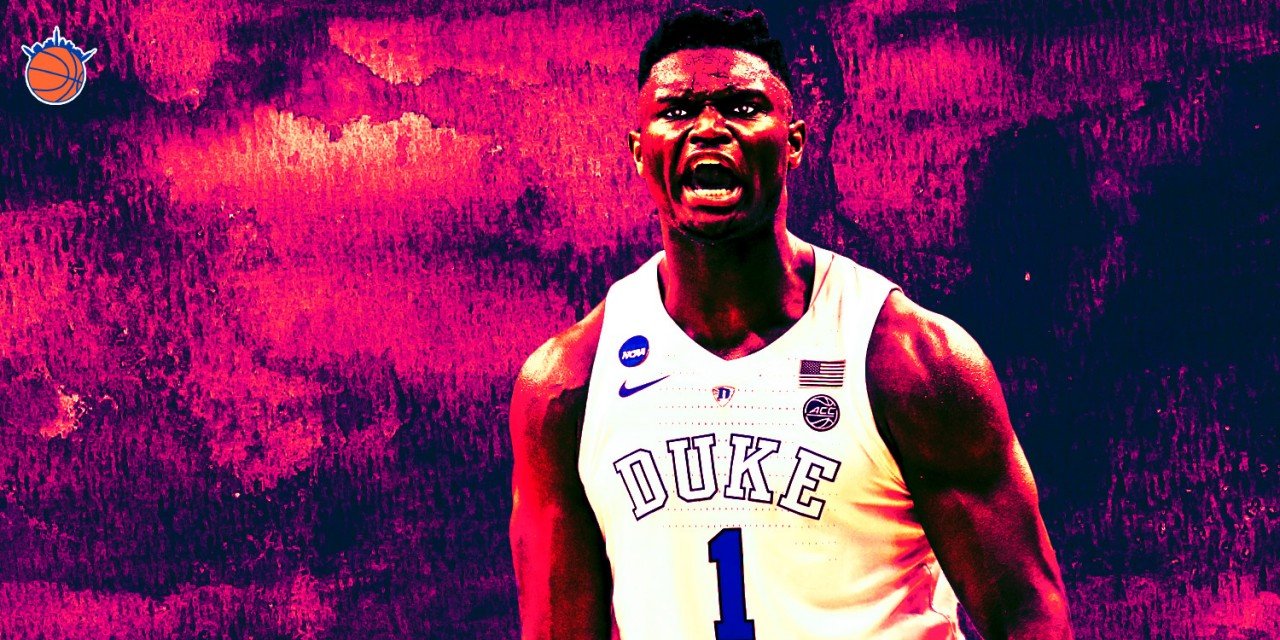 Only one team in the NBA can leave June’s annual draft with Duke stud Zion Williamson. If it’s the Knicks, well, they’ll be plenty happy—possibly for years to come.

The Knicks Wall is setting a spotlight on the top prospects in the 2019 NBA Draft. Follow along with weekly features on the draft and players. Lottery day means evaluating Zion Williamson, the presumptive number-one overall pick.

Does karma exist? And if it does, whose karma matters most?

New York deserves Zion Williamson. Few fan bases have had to deal with as much shit as Knicks fans. Few teams can say they still fill their stadium when their last playoff game was 2,187 days ago. Few fans would stick around after their team trades a first-round pick for Andrea Bargnani when everyone knew it would be an epic failure, or sign Joakim Noah to $72 million for 53 games.

The list of gripes fans have with this team could fill every seat in the Garden, yet they still show support. They deserve some happiness.

James Dolan does not deserve Zion Williamson. He’s a thin-skinned owner who has never mastered the art of public relations. He tossed a legend from his own team out of the Garden like some drunk. He kept Isiah Thomas around way too long and has taken tax breaks when he doesn’t need them. By all accounts, he does not deserve a gift as great as Zion.

Tuesday night we learn whose karma is greater: a legion of loyal fans or a maligned owner.

Williamson is a gift from the basketball gods. He’s the best one-and-done prospect to grace the draft since at least Anthony Davis—and definitely since LeBron James. Modern marvel is a heavy description of someone, but it bodes true for Zion.

Zion’s presence loomed in the background of the NBA season like the Night King, and he became Knicks fans’ avatar of salvation during one of the most loss-heavy seasons in franchise history. If this pilgrimage ends with the basketball gods gifting us Zion, every painful loss along the way will be worth it 10 times over.

Blessed with supernatural speed, agility, and strength, Williamson pays his debts with tireless work. At five-years-old, he knew he wanted to be a college basketball star. By nine, he was making his destiny a reality, training at 5 a.m. every day. At 18, he put together one of the best seasons college basketball would ever see, and accomplished the impossible—he made everyone Duke fans for a year.

Now the hope is he can accomplish another impossible feat: making the Knicks great. He has both the skill and the will to get it done.

If you question Zion’s ability to handle New York, take this into account: he’s coming off a season where NCAA broadcasts had a freaking Zion Cam. He is more than prepared for the limelight and has put in the work to handle the heavy burden of saving a franchise. If you still have your doubts, please watch this documentary short.

Nothing is Given || Everything is Earned pic.twitter.com/QDQC0GSPPR

One of the best quotes in the doc perfectly summarizes Zion’s mentality.

“I’m going to embarrass you. It’s just like that. If you’re in front of me, sorry, I’m just going to have to kill you that night.”

Need I say more? By now you know everything about Zion, but while you’re here, let’s take a closer look at what the basketball gods can gift us.

Playmaking: The last time the Knicks employed a dynamic playmaker, it was a well-past-his-prime Jason Kidd. Zion is not a point guard in the literal sense, but he has trained for this his whole life. As a kid, he played soccer and quarterbacked the football team. When he began training with his stepfather, Lee Anderson (who played college ball), it was to play point guard.

Size may have removed him from running the point in a traditional sense, but David Fizdale can toss him the keys to the offense.

At Duke, Zion was the chief playmaker. Some of his best non-dunk highlights were passes:

HOLY MOTHER OF GOD WHAT A PASS FROM ZION pic.twitter.com/xqrYkiIzX8

Plays like that are where the LeBron comparisons originate and are more commonplace than outliers for Williamson. He reads the floor as good as anyone in the draft, and his chemistry with his fellow stars is unmistakable.

Zion to RJ for three ? pic.twitter.com/WXIzQ2KuA8

Position-less basketball was Fizdale’s mission statement. With Zion he has the opportunity to accomplish this, running him as the point center or point forward given the lineup, à la Draymond Green.

His assist totals at Duke were not all that impressive (2.1 per game, 3.8 per 100 possessions), however, that has more to do with the lack of weapons around him at Duke outside of R.J. Barrett and Cam Reddish. Even if Kevin Knox, Allonzo Trier, and Mitchell Robinson are his most talented teammates, it would be a much better situation than he had in Durham.

And if he is playing alongside the likes of Kyrie Irving and/or Kevin Durant? Broadway will shut down every time the Knicks play.

Transition Offense: The fact Zion was able to find open space in a crowded college court bodes well for the significantly more open NBA terrain. The South Carolina native’s effectiveness in transition is the “well, duh” parts of his game.

He can leap over buildings in a single bound and burst through brick walls like the Kool-Aid man. A 10-foot rim is child’s play.

ZION FROM THE CLOUDS pic.twitter.com/PuG3dfM4UL

There were plenty of fun Zion moments at Duke. A large chunk of those moments happened when the pace was cranked all the way up and Zion was allowed to be free. No lob is too high, and no pace is too fast.

And in the rare case the defense is in front of him, well, this happens:

In the instances opposing defenses make a business decision and take their L, he makes sure to get his money’s worth:

His God-given athleticism and cerebral court vision are amplified in the open floor. If there was one clear-cut positive from last season, it was the Knicks played best when the pace was turned all the way up.

Kevin Knox looked confident, Frank looked comfortable, and Mitch looked good doing most things. Add Zion to that mix, and Fizdale could have an exciting young core to unleash.

Defensive Versatility: This is the area Zion Williamson yields the most value. Defensively there are no question marks, only exclamation points.

Defense rarely gets people going, but the blocks Zion makes bring just as much excitement as a Steph Curry heat check. He always seems to be in the right place and able to erase any mistakes by his teammates.

In the clip above, someone fell asleep on the corner shooter—a familiar sight for Knick fans—and he picked them up with a jaw-dropping block. Even when he gets caught slippin’, Williamson’s able to recover.

The potential Zion-Mitch frontcourt should keep opponents up at night. Much like on offense, Fizdale could have Zion roam freely, taking on the opposing team’s best player.

Should Durant end up joining, he would want some familiar settings. Zion could be his new Draymond and anchor the defense. Future MVP could be a little ambitious, but it is not a hot take to say Zion should be in the Defensive Player of the Year discussion most of his career.

Shooting: Looking for faults in Zion’s game is like trying to nitpick ways Emily Ratajkowski isn’t a supermodel. Still, there is one area where Zion must prove doubters wrong: his jumper.

It has been the main talking point for anyone attempting to temper his hype, but the truth is he didn’t shoot the ball that bad at Duke. He finished his college career shooting 33.8% from deep (2.2 attempts per game, 71 total for the season) and 64% from the free throw line.

This isn’t an Andre Drummond situation where you dread every moment he steps to the line. Teams will certainly live with him shooting and will likely guard him similar to Ben Simmons.

The key difference? Zion is not a coward. He will shoot the three if you give it to him.

When Duke desperately needed him to connect, he delivered. Spotting up seems to be the best course of action given his slow release.

That release will become a problem when he has to create off the dribble—an area we didn’t see a whole lot of at Duke. But Zion is a relentless worker. He will never be a sniper, nor will he be a liability.

Long Term Offense: As much as we would love to look at prospects through a Keynesian lens, it is vital to look at the long term. Zion’s lack of shot and reliance on his godly athleticism does raise the question, what does he do when he can no longer do this:

He was a man among boys in college. Even when there was no clear path to the rim, he would create one.

ZION ARE YOU KIDDING ME pic.twitter.com/iLn10tfKSv

This will still be the case to an extent in the NBA; 285 lbs at high speeds is tough to handle in any league. But when he’s no longer able to operate at high speeds, what happens?

That is a question that has yet to be answered. Zion should pay attention to LeBron and Blake Griffin’s career arcs. Both guys—Blake is the most extreme case—were ready to adjust when they lost the ability to dunk at will. Zion will have to learn the same eventually.

Taking Zion first overall is a no-brainer. Fizdale has put any concerns the team might pass on him to bed already.

The only remaining question is, should the team send Zion off to New Orleans for Anthony Davis? As enticing as adding AD is—and the potential of adding the best big man of our generation is temptation personified—the chance to grow with Zion is equally appealing.

For the group of people that fear Kyrie Irving is Carmelo 2.0, a Davis trade could be just as much a redux. If Davis were to come, the roster will be gutted as it was when ‘Melo arrived. That backs the Knicks into the same corner they were in, where they have to pray other stars will join.

Zion is insurance for Durant opting to stay in Golden State. He is also just as enticing to play with as Davis will be, even considering the unknown Zion brings.

Has fate finally gifted New York another franchise player? I sure hope so. We paid our dues and then some. It’s time for the basketball gods to pay us back.